Slyp, a start-up which looks to do away with paper receipts, has closed a $4 million round led by ANZ Ventures, with participation from National Australia Bank (NAB), Westpac-backed Reinventure and Scentre Group, according to the Australian Financial Review.

Founded by two former PayPal executives, Slyp operates by sending a digital docket straight to a buyer’s internet banking app. Slyp co-founder and chief executive, Paul Weingarth, says the funding will be used to hire more developers as it continues to build a secure “bank-grade” platform.

Its service will first be integrated into the NAB mobile banking app later this year, and it has signed several of Australia’s leading brands onto the platform including Harris Farm, Bing Lee, Cue fashion, Barbeques Galore and San Churro. 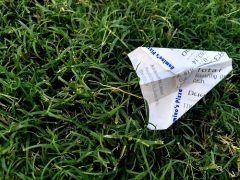 “We are in a unique position as the platform needs to scale to millions of users within the initial six to 12 months of launch. There are several interesting scale challenges that we have had to solve, and this requires some of the country’s top technology talent,” says Weingarth.

The tool comes with features such as warranty and return reminders, ratings, rewards and product recall alerts. The smart receipt is automatically linked to a customer’s bank card and then displayed inside their banking app.

“This capability can provide significant value to retail customers, merchants and financial service providers, and aligns with our focus on building relationships with emerging growth companies in the fintech space that can support our customers, bankers and partners,” says ANZ Ventures managing director, Ron Spector.

Rohen Sood, general partner at Reinventure, believes Slyp could become a globally successful company and its early success in locking down partnerships with big banks stood it in great stead to establish itself.

In addition to the retailer agreements, Slyp has signed more than 20 tier-one point of sale (POS) providers on the platform including Retail Directions, Apparel 21, Magenta Retail, Island Pacific and Gap. Scentre Group has also agreed to promote adoption of Slyp’s smart receipts to retailers in Westfield shopping centres in Australia and New Zealand.