Tala, a Santa Monica, headquartered start-up that creates a credit profile to provide uncollateralised loans to millions of people in emerging markets, has raised $110 million in a new financing round to enter India’s burgeoning fintech space, according to TechCrunch. 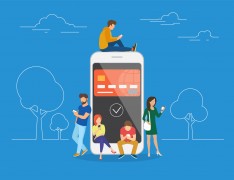 The new round takes the start-up’s total fundraising to more than $215 million and valued it above $750 million. Tala has also raised an additional $100 million in debt, including a $50 million facility led by Colchis in the last year.

Tala looks at a customer’s texts and calls logs, merchant transactions, overall app usage and other behavioural data through its Android app to build their credit profile. Based on these pieces of information, its machine learning algorithms evaluate the individual risk and provide instant loans in the range of $10 to $500 to customers.

It is unclear what the direct relationship is between access to the texts and call logs of its customers and what it does with obtaining instant loans. This model is different from how banks and most other online lenders assess a person’s eligibility for a loan. Banks look at a user’s credit score while most online lenders check the financial history.

Tala approves loans within minutes and disburses the money via mobile payment platforms. The start-up has lent over $1 billion to more than 4 million customers to date — up from issuing $300 million in loans to 1.3 million customers last year, Shivani Siroya, founder and CEO of Tala, told TechCrunch.

The start-up will use the new capital to enter India, says Siroya, who built Tala after interviewing thousands of small and micro-businesses.In the run up to launch in India, Tala began a 12-month pilot program in the country last year to conduct user research and understand the market. “The opportunity is very massive in India, so we spent some time customising our service for the local market,” she says.

According to World Bank, more than two billion people globally have limited access to financial services and working capital. For these people, many of whom live in India, securing a small size loan is extremely challenging as they don’t have a credit score.