Deutsche Bank has started a digital  bank called Fyrst, designed for freelancers, founders and entrepreneurs. However, the project is currently suspended by their former subsidiary, Postbank, reports Ruby Hinchliffe.

Fyrst should be a challenger to other fintechs, with one of its main aims being to compete with smaller suppliers for large-scale institutes. 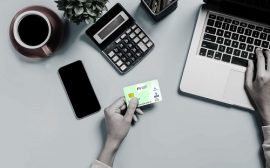 The banking newcomer has announced that it is the first digital bank specifically for self-employed workers which offers the ‘promise of security’ – although it is not to be confused as an additional digital bank, rather it is an offer from the private and corporate bank DB.

Traditional banks have often ignored nomad and one-man workers since their business model has long been considered less lucrative, but this creation suggests a change in thinking from the 15th largest bank in the world.

Fyrst will compete with services such as Finnish bank, Holvi, who recently announced Germany as one of their core markets and focuses on creating advocacy among freelancers and small digital businesses by offering services such as tax calculation.

Other potential competitors include Berlin-based, Kontist and Penta.