Marshall Islands take on Chinese might in crypto fight

The president of the small country of the Marshall Islands, Hilde Heine, is seeing increased opposition to her plan of making SOV, a cryptocurrency, the national currency, replacing the US dollar in the country. 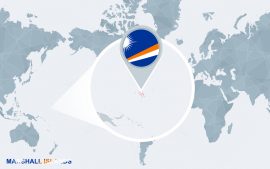 A vote of ‘no confidence’ is expected to take place today Monday (12 November) by a group of opposition senators.

This vote, if it were to go through, would see Heine, who holds a PhD from the University of Southern California, stepping down from her position.

While the cryptocurrency is the main issue at hand, this vote was also prompted by other criticisms.

In a statement she made last week, she said this opposition appeared as a result of a collusion with Chinese interests, and not the inefficiency of SOV.

She claimed her opponents were working on China’s behalf to secure a remote Marshall Islands atoll and turn it into a “country within our own country”.

The plan to move away from a traditional currency to crypto was signed in February of this year as the Sovereign Currency Act.

This marks the first time a sovereign nation, which has a vote in the UN, adopts a cryptocurrency. By virtue of being the legal tender of the Marshall Islands, SOV is legally defined as money, worldwide.

The Marshall Islands is one of the smallest sovereign nations in the world with a population of roughly 50,000 people.