PayPal wrote to a deceased woman threatening to take legal action for having breached its contract by passing.

Lindsay Durdle had been diagnosed with cancer a year and a half ago. Her husband, who received the letter, contacted the BBC right after, who reported on the matter.

The letter said that she owed the company about £3,200, adding that: “You are in breach of condition 15.4(c) of your agreement with PayPal Credit as we have received notice that you are deceased… this breach is not capable of remedy.” 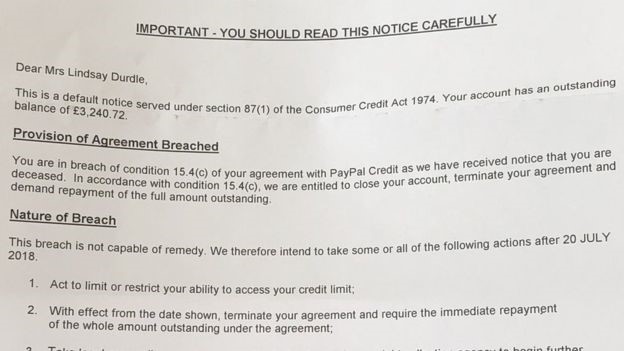 The firm has since apologised and acknowledge the statements were “insensitive”, launching an investigation on the matter.

PayPal has written off the debt completely. How kind.

“We apologise to Mr Durdle for the distress this letter has caused,” a spokesman added. “We are urgently looking into this matter, and are in direct contact with Mr Durdle to support him”.

The extent of this support is surely questionable.

The spokesman said it had been either a bug in the system, a bad letter template, or human error.

We will never know the follow-up to this, as PayPal has said it won’t disclose it due to it being an “internal matter”.

Although this is a really unfortunate error, mistakes like these are possible when it comes to automation. Perhaps not to this extent, however.