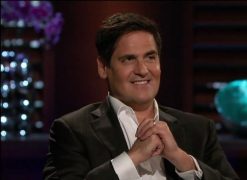 The financial terms of the agreement were undisclosed, adding to the company’s previous $1.6 million raised.

Under Cuban’s advisory, Billshark and its API will be more visible. Cuban will offer increased brand recognition in places where consumers typically pay their bills.

“We were fortunate to meet Mark and he loved our practical service as well as the potential for our platform,” says Steve McKean, CEO of Billshark. “Monthly subscription bills creep up over time, seemingly without reason, and Americans overpay for these services by about $50 billion per year. Mark provides unmatched expertise in partnerships, product development and marketing.”

Founded in 2015, Billshark aims to help consumers lower their monthly bills, including TV, wireless, internet, and home security. To ensure they are not overpaying for these services, consumers and businesses upload a photo of an existing bill to the Billshark app, then the Billshark team goes to work negotiating with the biller for a lower rate.

The company’s success is evidenced in the numbers. Billshark says it frequently saves consumers 25% or more, adding up to hundreds of dollars in savings per year. So far, the company has saved users more than $10 million; the average customer saves about $300 per bill per year. Billshark’s goal is to save users more than $2.7 billion by 2025.

“Companies that save their customers both time and money always catch my attention,” says Cuban. “Billshark eliminates the stress of negotiating or cancelling a bill, so its customers can focus on more productive and long-term goals.”

Billshark also recently announced the One Bill, One Child programme. The programme aims to offer middle school students a better financial education to give them the tools they need to successfully manage their finances as adults. For every bill submitted to Billshark, the company pays for a child to receive an hour of financial education from Ramsey Solutions. Billshark’s goal is to educate one million children by 2025.

The company started 2018 by partnering with Narmi, which integrated Billshark’s API into its digital banking platform.