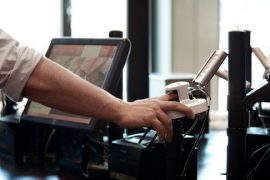 Pay with a touch of a finger

“Now, students and visitors at CBS can leave their cash, cards and smartphones behind and buy lunch using just their finger,” the vendor says.

In collaboration with CBS, Smart Payments (an independent business founded by Nets) and Fingopay (part of Sthaler), Nets has installed finger scanners at the check-outs in the business school cafeteria. Anyone with a Dankort, the Danish domestic card scheme, can enrol in the system and link the unique pattern of veins in their finger to their account.

“Biometrics, the use of biological recognition for identification, is not a new phenomenon,” Nets observes. “Paying with your finger vein is similar to the biometric capabilities on smartphones that consumers are already comfortable with – and even more secure.

“The payment process is very much like other contactless payments but the increased security creates one key difference – even high-value transactions do not require the extra step of PIN entry.” Users can unlink the function at any time they want if they wish to stop using it.

Jeppe Juul-Andersen, VP of the Dankort sector, Nets, says the latest project demonstrates the speed of paytech development. “In 2017 we launched Dankort on the mobile using brand new technology, and now only one year later customers can become their Dankort themselves,” Juul-Andersen adds.

If the CBS pilot is well received, Nets will consider launching similar schemes in other Nordic countries.