It’s almost as if we have reached the point where entering a bank is not much different from entering any other business. It’s all about the customer experiences, or so we keep on hearing and the thought here is that the huge walls of bullet-proof glass along with the presence of guards posted nearby do not do anything – to improve that experience.

In fact, entering a bank’s branch office today isn’t all that different to entering a hospital or a government agency – think your average DMV. A somewhat sterile experience, where you worry that someone will approach you with bad news. 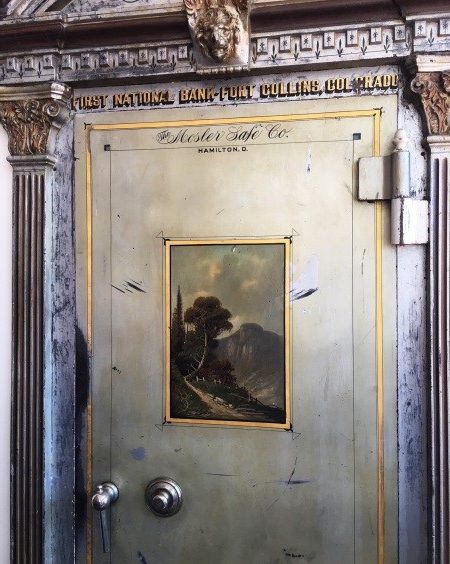 A safe or a painting?

Walking into a restaurant this weekend my wife happened to notice a rather odd-looking painting. On further inspection, it was the door to a safe and on even closer inspection of our surroundings the restaurant was actually a re-purposed bank branch office. Clearly, the safe wasn’t in working condition, although I gave the dial a twirl, but still the safe lent a certain other-worldly charm to the place. Times are changing and with that our expectations about what a bank’s branch office should look like and the experience we expect to enjoy.

As a youngster living in Sydney Australia the image projected by banks, reinforced each and every time you entered them, was that it was an imposition on the bank to hand over cash as with such a transaction, it was bank’s duty-bound obligation to inform you that tapping you savings, no matter the purpose, was against your better interest! No, leave your cash with us and enjoy the fruits of compounding interest until the time comes when you can use it to enjoy your golden years. Yes, put it all back in the safe for us to manage!

“But I need a new car, now, and I have saved for it so yes, give me MY cash. “I have to go down the road; they’re waiting for my return,” I would tell them. I could always discern the look of condemnation on the teller’s face. By the time the clerk updated my passbook and checked bank’s ledgers, anxieties would overtake me to where, leaving the bank, with cash in my pocket, I felt like I had really done something wrong. Providing a good experience wasn’t part of any bank’s business practice when I look back at banking as it was done in my youth. When it came to interacting with merchants, cash was the most relied-upon instrument available to the general populace.

Banks have branch offices today as an integral part of their branding – vast sums of money have been spent on reducing the bank’s name to a single word so that it can be easily seen, illuminated in neon, 24×7. Signs atop buildings, billboards and yes, the branch office, all contribute to reinforcing the image of size, strength and safety – your money is safe in our bank. But take away cash, a place to store important documents and legal records and yes, any further need of a safe, do we end up with an office indistinguishable from any other place of business? As long as that neon sign stays illuminated, it’s a branch office, right?

Looking more closely at the safe inside the restaurant I could easily make out that it had been manufactured by the Mosler Safe Company – a manufacturer that went out of business in 2001. It had been in business for more than a century, but fell on ill times and Diebold ended up buying much of the former company in bankruptcy court. However, the company had had a glorious past having seen one of its safes in Japan survive a nuclear attack. Furthermore, according to one source I checked, “when the US government began building bunkers and silos during the Cold War, Mosler became the de facto gold standard contractor for blast doors.” Where once a safe was used to protect money, records and documents today we are no longer as demanding of cash nor are we in need of physical barriers behind which we store all that we value!

Whereas in the past it was all an issue of whether you had the right mix of concrete, iron and steel behind which, banks assure their customers that their money, records and documents, are safe today the infrastructure we will likely encounter protecting all of this will be digital – blockchain/distributed ledger technology (DLT) and digital – perhaps even crypto – cash. Banks are carefully monitoring this technology as its immutable, hack-proof, structures seem ideal for ensuring deposit accounts, all records of the property we own, and yes even paper as diverse as wills and bills of lading are well-protected. With each new announcement of one bank or another piloting a program based on digitized and virtualised monetary systems, the role a safe may play seems so… twentieth century!

In many ways, banks relied upon their own deployment of safes at a time when the general populace didn’t have any other means to protect its valuables. Today, however, safes are commodities and with the tendency of individuals today to gravitate to sole-proprietor business operations, safes of all sizes and strengths have flourished, where safes are common place in our homes and even in the rooms of hotels and onboard cruise ships. We have safes to store our cash, our business records and yes, more often than not here in America, our gun collections. Digital currencies with digital wallets and their digitised credit /debit cards, digital passports and drivers licenses and yes, digital medical records – it is clear that safes may fade from the scene but where once we viewed our bank’s branch offices as places we could rely on as having a safe, marketing no longer sees safes as having anything at all to do with defining a bank’s branch office.

At a time when we question the future of branch offices and the role they will be playing in a digital and more than likely cashless society, it’s a safe bet that betting on the presence of a safe will be futile. In a digital world, you will never hear the door close. It’s as if our embracement of all things digital is signaling not just the birth of new industries but the end of others. As the Mosley experience exemplifies, if all you do is build safes and provide physical protection and then miss the opportunity to become part of the digital protection world, you will go the way of the buggy-whip manufacturer that misjudged the popularity of the automobile. The time is quickly coming where the last place you will want to turn up at, carrying cash, may very well be a bricks-and-mortar bank!

It is only a matter of time before digital currencies find their way into our daily lives (and no, I am not suggesting for a moment that we drop everything in favour of Bitcoin), our mobile phones become the keys to all our records (drivers licences are being phased out in favour of something displayable on our smartphones as are passports in some places) and just the subtleties in the way we walk – yes, our gait – may prove to be all that is required to check the status of any balances and valuables that we own.

In truth, this is not a likely eventuality in the near term. I need to remind my readers that this is just a glimpse into one possible future. And safes are really a tangible symbol for security – what was an accepted practice in the past may just be an anachronism in today’s world of banking. A symbol of what a bank stood for – protection and safe keeping. If we remove the need for safe keeping, will the branch office evolve to where it is little different to any other shopfront in a mall?

But here’s the thing – if we still want to deposit cash or have a need to withdraw cash, there is always the ATM and with the morphing of ATMs into kiosks capable of performing almost any branch office operation, including the support of safe deposit boxes as has been demonstrated of late, then for a time, at least, branch offices have options as they transition to the all-digital branch offices of the future – indistinguishable from any other merchant. That is, for as long as we view ATMs, morphed or otherwise, playing a role in a bank’s branch office.

“Clearly, the marketplace is already moving aggressively toward more advanced function ATMs and even the ‘next generation’ ATM platform that will further blur the lines between traditional ATM functionality and mobile devices,” and perhaps much more, observes Paragon’s director, global product marketing, Steve Gilde. “What this also means is that even more stuff will need to be tested to ensure that it all works well, i.e. new stuff, old stuff, transitional stuff and even stuff that hasn’t been thought of yet.” Safes may have gotten safer as more and more safecrackers tried their hand but today, there is a lot of onus on banks to ensure digital safecrackers are kept at bay!

There will continue to be a section of society that is either underbanked or even unbanked where cash remains the primary method for managing the budget. But these people have historically had little need to access a branch office of any bank. Any experience that they had was likely limited to the few occasions when they needed to “break a bill” for some reason, but even here, we already have ATM-like devices in most casinos capable of breaking bills.

“The death of cash has been announced so many times now it should be mortally wounded – however, as we continue to hear the story that cash is disappearing, the opposite is actually true – the money supply increases year on year,” says OmniPayments VP of business development (EMEA), Craig Lawrance. “And so we shall continue to need ATMs to go on dispensing the cold hard cash.”

I am still a huge fan of cash, mind you, as in times of crises when quick action is required, and when basic infrastructure is inoperable, having cash on hand can be very important. And yet, a safe-free world isn’t something I am advocating as needing our attention next week, but there will definitely come a time when carrying cash into the bank will be cause for a mild-panic attack. Not from us, but the branch office tellers. No, not here – take it somewhere else; don’t you know this is a bank and we no longer take cash! Why don’t you take it down the road for goodness sake and buy a car; they still take cash, don’t you know?! Ummm – as we then wonder; what’s a car?