The year 2016 saw the company integrated with more than one hundred banks in twenty-nine European countries, while 2017 saw Trustly ranked #242 on the Financial Times’ top 1000 fastest growing companies.

As of November 2017, Trustly has processed in excess of €10 billion worth of payments. The latest headlines featuring this OBeP company followed their successful announcement of “Pay N Play” at London ICE 2018. This feature allows Trustly to throw out old lengthy registration and verification processes while still protecting users’ accounts. So how does it work?

ICE Totally Gaming London took place on 6-8 February 2018, on similar dates as it does every year. This year the gaming event, which brings world-leading innovators from both the online and offline gaming sectors, saw the introduction of a new hall dedicated to payment solutions, a new Consumer Protection Zone, the world’s first Chinese Shooting Game from the Takara Gaming Group, and of course the announcement of Trustly’s Pay N Play software. 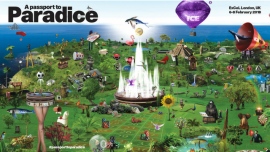 June 2017 saw Trustly CEO Oscar Berglund heralding that traditional bank payments will become faster, safer and more convenient due to the advancement of methods of digital authentication. This year, Trustly has proven to be at the forefront of this change, when their OBeP systems helped a lucky winner from Ninja Casino cash out in under five minutes. This casino promises players quick deposits, but Trustly has helped them allow players to make super-fast withdrawals too. Taking to ICE London for their eighth consecutive year, Trustly had a lot of hype to answer to, and they delivered.

So, what is Pay N Play? Through this system, when players come to a gaming or shopping site, rather than registering an account, they can begin playing or making purchases right away by simply making a deposit via their online bank through the Trustly system. During the deposit process, Trustly collects KYC data from the player’s e-banking account and shares it with the merchant or game site, together with the unique identifier created for the specific bank account in use. This allows the merchant to create a unique and identifiable virtual account for the player, tagged with a specific AccountID, in the space of a few seconds. This unique and identifiable virtual account persists within the merchant’s site, so it is impossible for winnings and payments to be lost, and sessions can be resumed immediately upon players re-verifying themselves through the same bank account notification process.

When players wish to withdraw, the money is sent back to the account the player deposited from using the same identifiable AccountID used in the depositing process. Payment is fast, simple and secure. This model comes in both a pure and hybrid variant, allowing stores and sites to adopt Trustly as an additional method or a total method.

This announcement has the thousands of attendees present at ICE London very excited, Trustly has promised and is delivering a sophisticated but surprisingly simple and secure payment medium. We’re excited to see how this product will grow and advance the industry, and we are also looking forward to seeing what Trustly and its competitors will come up with next.