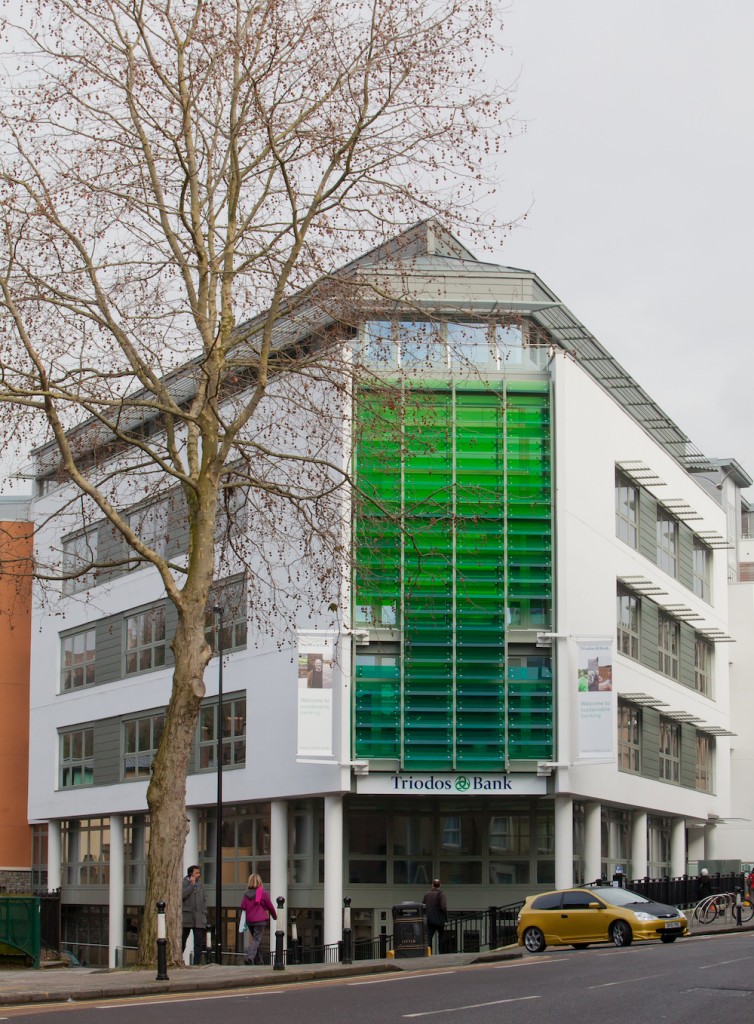 Triodos Bank in the UK stands out from the crowd for its ethical values but can it now kick on with a leap into the current account market? Banking Technology talks to UK MD, Bevis Watts, about this major development and the technology that underpins it.

Even if you didn’t know in advance about Triodos Bank’s ethical focus, there are plenty of hints in the reception area of its UK head office in Bristol. A vertical green wall of plants keeps the air fresh; chairs are made from recycled plastic from one of its clients; the front desk is from recycled glass; and much of the interior is also from recycled materials. On shelves are displays from some of the bank’s lending customers, typically SMEs, charities, cooperatives and community interest companies in sectors such as social housing, renewable energy, social impact and regeneration.

Another hint is when we seek out UK MD, Bevis Watts. His desk is in an open plan office, alongside those of his colleagues. He has an environmental and waste recycling background, unusual in itself for a banking MD, and took over at the helm in 2016, having first worked for the bank in 2008.

For most people, the term “nice bank” is probably considered an oxymoron but Triodos, along with a number of other ethical counterparts around the globe, is exactly this. The bank was founded in the Netherlands and was a pioneer in the sector. It also now has banks in Belgium, France (an agency), Germany and Spain, as well as the UK. The Netherlands, German and Spanish operations already had current accounts and the UK bank has now taken the major step of launching its own to complement its existing savings and investment products.

That current account is recently live, following a number of years of difficult deliberations about whether to make the leap. Watts says: “It was a long-held aspiration and a route well-trodden [by Triodos] in other countries. To be people’s first bank, we have to have a set of services to do that.” The UK operation has around 45,000 personal savers and 5,000 business customers, which is 150,000 to 200,000 fewer customers than Triodos Netherlands and Spain which have established current accounts. “We are not focused on size for its own sake but for a broader impact and greater reach.”

Notably, Triodos UK is charging £3 per month for the current account. “We are very proud to be charging and so far the response has been very good,” says Watts. After a phased start in June of this year, the full roll-out commenced in September, including the Current Account Switching service. 5,000 people expressed an interest on day one and the first switches have happened with no hiccups, he says.

The charge won’t strike most people in continental Europe as surprising but the UK still clings to its supposed free banking model. As Watts points out, the UK approach means that the “free” banking services are being cross-subsidised, often by those that can least afford to do so through exorbitant interest payments on unauthorised overdrafts, often over and above even the rates charged by payday lenders. “It was a challenging message, that there’s no such thing as free banking, but we were taken very seriously, ten years ago perhaps it would have been dismissed,” says Watts.

He admits the bank is usually a follower rather than a leader when it comes to technology. Nevertheless, it has some notable features. It has a geo-tracker “know where your money goes” app as part of its mobile banking that plots all of its lending customers around the globe, with details on each of them. This is part of its much-touted transparency, whereby it provides details of every lending customer so customers can align their money with their values (there is a desktop version at www.knowwhereyourmoneygoes.co.uk).

It also now has what it believes is the UK’s first biodegradable plastic debit card for its current account. It seems that where technology can back up and enhance its openness and green credentials, Triodos is willing to lead.

There was already an app in the Netherlands but the UK led a refresh of this. This is a common way of working, says Watts, whereby one country operation leads in a particular area. The bank is in a learning phase with the app, looking at customer behaviour, and it will be enhanced with new features over time. The mobile offering as a whole has full banking services, including real-time payments and the ability to move funds between accounts.

The bank’s aim is to double its customer base in the next four years and the decision to launch the current account followed internal customer and external market focus groups. As well as attracting new customers, the bank is expecting a healthy uptake from existing ones although Watts accepts that there are still likely to be customers who want branch-based banking, which Triodos doesn’t have, even though more and more people are happy to move away from the model…

This is an excerpt. The full article is featured in the November 2017 issue of the Banking Technology magazine. Click here to read the digital edition – it is free!