Fintech Trends: the Expected, Unexpected and What’s Next at FinovateFall 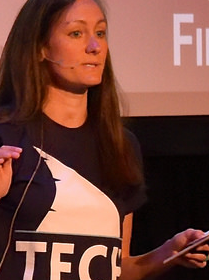 Anyone who works in fintech knows that the past few years have been a roller coaster ride of trends. So what’s next? How will the year close out?

As we wait for the next four months to unfold, one of the best indicators of fintech trend swells is to watch what companies showcase at FinovateFall (coming up Sept. 11-14). The graphic below shows some of the big trends we’ll see from the demoing companies.

Here’s my take on these themes:

With four months left in 2017,  I’ll step out on a limb and offer up a few predictions. As far as enabling technologies go, voice banking will start to snowball as Alexa and Google Home becoming more commonplace. Augmented reality will grow—but just slightly—and virtual reality, though it sparkles, will begin a slow death in fintech. Regarding broader industry trends, my colleague David Penn, research analyst at Finovate said, “more human/robo hybrids in the robo advisor field, continued embrace of biometrics solutions for mobile and online banking security, and a resumption in fintech investment for the balance of 2017.”

Want to make your own predictions? Come join us at FinovateFall Sept. 11-14 in New York. Register with Paybefore’s discount code Paybefore20 to save 20 percent on the current ticket price.

Julie Muhn has been covering the fintech world on the Finovate blog since 2011. She has attended 26 Finovate and FinDEVr events across the globe and hosted five events as emcee. You can follow her on Twitter at @julieschicktanz.