Curve Takes Users ‘Back in Time’ 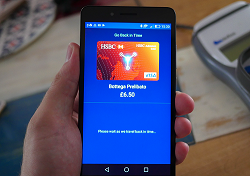 Payments startups usually boast about their ability to future-proof their technology. For U.K. payments startup Curve, a big part of its appeal is helping users go back in time.

The company on July 4 announced the rollout of a patent-pending, “financial time travel capability.” Users of its travel and expense management prepaid Mastercard and accompanying mobile app tap the “Go Back in Time” option to switch the card used to fund a transaction up to two weeks after the purchase was made.

The benefit, according to Curve, is giving cardholders the flexibility to choose their preferred card for payment, so they can take advantage of loyalty points, avoid fees or simply correct a mistake.

After more than 50,000 signups in Beta mode, Curve recently reported that its cards—issued by Wirecard Card Solutions—have been used for more than £50 million (US$63.3 million) in payments in more 100 countries. The company, which placed second in last year’s Money2020 Europe startup contest, will announce closing a Series A round and fully launch this year, according to an announcement.

Competition in the travel and business expense arena is growing, with a significant number of new entrants vying for the SMB market as well as larger corporates that may need to offer services beyond traditional credit purchasing cards. Several 2017 Pay Awards winners, including Bento for Business, PPRO and Banca Popolare di Milano, cater to this emerging vertical market.