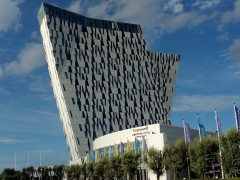 For the finale of the final day of Money20/20 Europe, financial inclusion was discussed with resolute optimism for a bright future.

As a brief recap of events here in Copenhagen, on the first day (26 June), some novel uses for artificial intelligence (AI) were discussed. The sessions on 27 June offered up mixed emotions – the second Payment Services Directive (PSD2) still leaves people puzzled; while APIs were perceived with positivity. On the morning of the final day (28 June), China and India’s fintech scenes received plenty of approval.

Also on the last day, a panel offered up insights and analysis for “Tech for inclusion: A sustainable commercial model enabling access for all”.

Members included the Centre for Finance, Technology and Entrepreneurship (CFTE), which launched this month; Citi; Famoco; TransferTo; and French digital bank Compte-Nickel – which has seen phenomenal growth with its low cost model.

We could argue over the exact figures, but the moderator put the number of unbanked at around two billion plus – and asked how we can get this “last batch out” of their predicament.

The panel were confident in their answers and visions. One view from Eric Barbier, CEO of TransferTo, is that smartphones offer penetration to bring some form of banking to people in developing countries. This is a common opinion at events. Hugues Le Bret, founder and CEO, Compte-Nickel, added that in Africa 90% of people have a phone (and not just smartphones).

In terms of getting people to change their behaviour to push inclusion ever forwards, Tram Anh Nguyen, co-founder of CFTE, thinks embedding financial education into the product will help. She also calls for more financial literacy – in her view some women in developing countries simply don’t know how to sign up for bank accounts.

While Le Bret felt the phone is helping end exclusion, he did remind people that biometrics have turned individuals into the technology. With the face or a finger, they can pay and do banking.

Whatever method is chosen, all on the panel believed they are on the right track to total tech inclusion and making a viable business out of it.

Elsewhere, Denmark’s very own NewBanking won first place, and $40,000, in the Money20/20 start-up pitch awards. This is a platform for firms at various stages of funding to make a three-minute “pitch” and grab themselves some cash and attention. The firm was founded in 2015 and offers services in identity management and verification, know your customer (KYC) data, anti-money laundering (AML) screening and payment transaction monitoring.

As with last year, Money20/20 Europe went well. There were about the same number of people in attendance – roughly 4,000, I guess. The event had a few extra stands – such as special pavilions for the UK, France and Sweden to show off their firms in one place. Next year will be in Amsterdam, so there may be more plans for expansion.