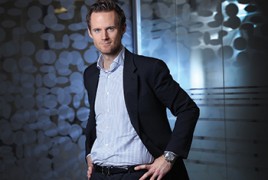 Anders la Cour, Saxo Payments: correspondent banking is under a lot of pressure

In an increasingly globalised economy, payments have struggled to keep up and pressure is mounting on the traditional correspondent banking model.

A recent research study by analysts PayStream Advisors found that higher volumes of cross-border payments were correlated with higher rates of payment errors.

The theory of expanding internationally is attractive to many corporations but in practice, paying or being paid by suppliers and clients can be costly and difficult.

The survey of 400 organisations across a variety of industries found 61% of firms relied on wire transfers for international payments, with global ACH the next most popular payment method, used by 20% of respondents. Well over half – 63% – require a special process, separate payment method and sometimes bank to undertake payments to global suppliers.

In a presentation at the summit, Saxo Payments chief executive, Anders la Cour, said correspondent banking was under pressure from five main factors:

As a result, banks are retrenching and operating only in markets and verticals where they can make a profit. This is a topic of concern to financial regulators and governments. For example, in mid-December last year, the Financial Stability Board (FSB) published an action plan to “assess and address the decline in correspondent banking”. There’s a long list of actions the FSB is taking, much of which is focused on collecting and analysing data.

In the short-term, the Financial Action Task Force (FATF) clarified that its recommendations on money laundering and terrorist financing did not require financial institutions to conduct customer due diligence on the customers of their respondent bank clients (often defined as know your customer’s customer).

This was one of the main causes of institutions pulling out of certain markets, particularly emerging economies. In 2015, Royal Bank of Scotland (RBS) announced it was reducing its global operations from 38 to 13 countries. An International Monetary Fund (IMF) report, “The Withdrawal of Correspondent Banking Relationships: A Case for Policy Action”, found that 75% of large banks had exited correspondent banking relationships.