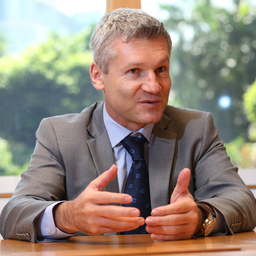 Temenos is looking to conquer the core banking software markets of China and Japan.

There are 133 such banks in the country (founded in the mid-1990s through shareholding reform of urban credit cooperatives). According to the China Banking Regulatory Commission (CBRC), they now hold CNY 26.3 trillion ($3.8 trillion) in combined total assets – over 12% of China’s banking system.

In terms of assets, Bank of Beijing, Bank of Shanghai and Bank of Jiangsu are the largest.

There are some exceptions though. Oracle FSS was successful in onboarding Bank of Anshan, Bank of Jilin, Bank of Shaoxing and Bank of Taizhou.

Also, the aforementioned Bank of Shanghai is a long-standing user of Temenos’ T24 core banking system.

Frick sees a lot of opportunity here. The vendor has developed T24 Model Bank for city commercial banks, he says, and hired “a great team” from rival Oracle FSS. It is also ramping up its partnership efforts – as having local partners is “very important” in China, Frick notes.

Bank of Shanghai is currently on a very old version of T24 (R8). It has recently gone to market to evaluate its options, including T24 Model Bank (R17) and the aforementioned Sunline. The decision is yet to be made.

Japan will be tackled via a major partner, Frick says. This is likely to be NTT Data, one of the largest IT software and services providers to financial institutions in the country.

NTT Data has its own long-standing core banking system, Besta. It is offered in the shared environment and is targeted at the mid and low-tier banking sector.

Besta is mainframe-based and written in Cobol. A complete rewrite was considered, but it was decided that a partnership with an established core banking specialist is a better option, Frick says.

Demos and conversations with NTT Data are now underway, he adds. Both parties are evaluating options.

NTT Data would undoubtedly be a lucrative partner. It currently holds the monopoly in the lower-tier banking market (e.g. regional banks, community banks and co-ops) and a significant share of the mid-tier space.

The vendor claims all of 750 agricultural co-ops in the country as users, and over 90% of credit co-ops (150 entities) and shinkin banks (co-operative regional financial institutions; around 245 entities).

Around a third of Japan’s 100+ regional banks also use Besta.

Frick also cites India as an interesting market. It currently is dominated by local vendors like TCS Financial Solutions and Infosys/Edgeverve.

There are rare instances of international suppliers winning local business, such as Temenos at Grameen Koota and Equitas Small Finance Bank, and SAP at Adarsh Credit Co-operative Society.