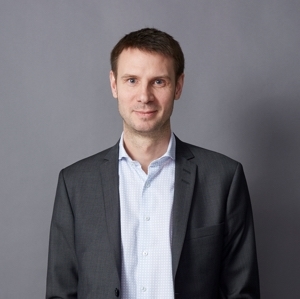 In an exclusive interview, Oliver Hughes, CEO of Russia’s Tinkoff Bank, talks about its online financial supermarket, maintaining momentum, and how US and UK banks can be occasionally underwhelming.

If you have enough money, you too can set up your own bank.

Tinkoff Bank was the brainchild of Oleg Tinkov, a Russian entrepreneur and one of the richest businessmen in the country. Set up in 2006, the bank does not have branches or ATMs, but it does have a full banking licence and does offer a certain kind of supermarket.

Tinkoff injected vast sums of his own personal wealth into the project – namely $50 million in the beginning, then another $10 million – and with most of the investment falling in 2006/07.

While the bank and Tinkov have both had an interesting life, so has Hughes.

As you can guess from the name he is not Russian, but originally from Lancaster, a small city in the north of England.

His journey from there to a top job at a Russian bank began with a Russian degree and studying in the Soviet Union in 1991. Following this experience, he went back to the UK for a while, lived in France and other places.

Hughes’ background is not purely finance. His Bachelor’s degree was in languages, history and politics. He then did a Masters in International Relations and an MSc in Information Science and Technology. He later worked in various companies, had a spell in academia and eventually in 1997 found his way into a role with Visa.

This position involved working on authorisations and risk management. From there it was to a business development role – and he went out to Moscow to open an office and stayed. Hughes worked at Visa CEMEA for ten years but has been with Tinkoff Bank since the beginning of 2007.

But times have changed if you know Russia of old.

“The days of being a foreigner with the halo effect are long gone. Now, the fact you’re a foreigner is a disadvantage more than an advantage,” he says.

“I have got a job here not because I am British but it comes down to the skills I have.”

As the former head of the Russian office for Visa, he knew the players and finance sector. He also knew the customers’ behaviour and products and had the managerial experience.

The $60 million from Oleg Tinkoff got it up and running – something which Hughes calls an “inoculation” and “a big shot in our arm”.

However, since then it has had “to live hand to mouth and we don’t wait for angel investments”. In the early days of Tinkoff Bank it was “very hard to get capital, which disciplined us”.

Over the next few years, Tinkoff raised a further $100 million of equity – not from Tinkov, but from a series of private equity investors. The bank broke even after 18 months and according to Hughes has been profitable ever since.

Tinkoff Bank offers an “online financial supermarket”, and how it was born is an intriguing one.

“First, our revenue did come from credit cards but when things got tough with the economy it became very difficult. We remained profitable but had a very volatile bottom line.

“Second, customers are coming to our site and we get one million applications per month. But we only offered them credit cards, current accounts and maybe deposits. We weren’t monetising them and we needed to cross sell and offer payment products.”

Therefore, it needed to stabilise and diversify its revenue streams.

It did start taking deposits in 2009, soon after the financial crisis and on the back of this deposits business it built its credit card business. The bank then started “growing organically and incrementally”, and by 2013 it had different products, such as online insurance.

According to Hughes, the bank realised it had a platform which was “quite powerful through which we could sell other guys’ products”.

It has been a “very long running project” and exists as an “umbrella brand” – where it brings all of what it does into one place.

An example would be mortgages, which “we don’t want to do as it is heavy duty balance sheet product”. From 2013 to 2014, it started to sell other banks’ mortgages through its platform.

This supermarket concept is still in its early stage as it is a long project but Hughes says “we like the results so far”. The bank is getting around 25,000 applicants per month and “actively ramping it up”.

When it was put to Hughes that the bank is doing the same as everyone else, he says the way Tinkoff delivers these products is very different to traditional banks…

This is an excerpt. The full article is available in the April 2017 edition of Banking Technology.