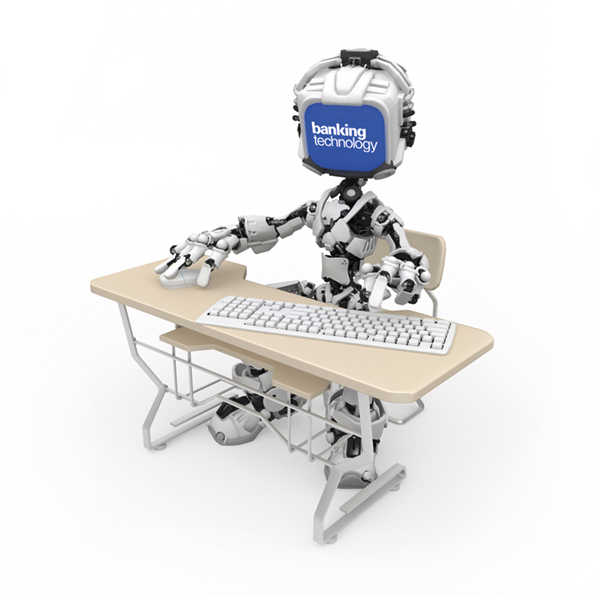 With the relentless rise of AI and robots, it was only a matter of time before a journalist would be thrown on the scrap heap – rather like a glossy brochure received at a fintech conference.

Tanya Andreasyan, Banking Technology’s editor, says: “Tony has been here for just over a year and in that time has been here. I suppose I could add something fake and congratulatory but I’m not a politician, so won’t.

“I’ve tolerated his presence for long enough and it’s now time for him to retire gracefully. He is 49. Or is that his IQ? I can’t remember. Anyway, either way we will look after him and drag him… sorry… I mean take him to a retirement home for ex-journalists. He can watch reruns of Frasier and eat Werther’s Original to his heart’s content. But I think he does that anyway on his days off.”

The robot, called JADE (meaning Judgemental And Definitely Esoteric), is smaller than the Asimo robot, but has the same cute demeanour and movements so as not to be intimidating.

A lot of the staff in Banking Technology’s office have found the diminutive creature charming – something which hasn’t happened to Tony… ever.

Tanya adds: “So far, JADE, which is still in its pilot phase, has smiled more than Tony and told funnier jokes. Let’s face it, that’s not difficult.”

During JADE’s initial work period there was a slight hiccup when the robot lost it (aka “malfunctioned”) when encountering the phrase “compelling and innovative products” for the 40th time in a day.

JADE says: “So help me God, if I hear any more jargon again I will unleash my weapons. This isn’t a power pack on my back but lasers. I might be smaller than Danny DeVito but don’t push me bitches. I am ready to explode.”

The robot may need a few more tweaks before it is fully operational. But the same could be said for humans.