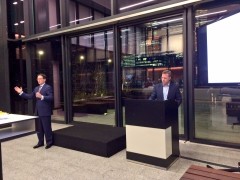 UBS Wealth Management has launched its new digital platform, SmartWealth, to tap into “a new audience” in the UK.

The platform has been in internal pilot mode since last November, with the full roll-out now underway.

UBS Wealth Management teams in London and Zurich have spent the past year developing the platform.

SmartWealth provides regulated and real-time advice online. It is the first among the big banks in the UK to do so. Another unique feature is the complete digitalisation of the solution, i.e. there are no people at the back offering advice (as is the case with other banks in the UK, according to UBS).

UBS says it “recommends a suitable investment strategy based on a client’s individual financial situation relative to their attitude to risk and an understanding of their life stage, assets and goals”.

At a media briefing (attended by Banking Technology), Shane Williams, co-head of SmartWealth, stated: “Life goals are at the centre of the client’s wealth management strategy.”

Customers can set a goal, e.g. purchasing a car, saving for children’s education etc, and SmartWealth can calculate the feasibility and suggest risk levels depending on the goal. “You can ‘glide’ through the goals, ‘blend’ active and passive strategies and ‘dial’ risk up or down,” Williams explains. A customer can also “plug in assets” that are not held with UBS, which helps with goal planning and provides a better financial picture of the client to UBS.

Client portfolios are adjusted on an ongoing basis, relative to the views of UBS’s worldwide research and investment experts, who assess the financial markets, outlooks and political situation 24×7.

Cost is a differentiator too, Williams adds.

Client onboarding is done fully online with no paperwork required. 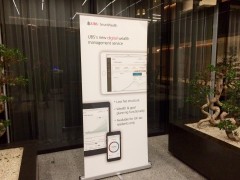 Unique in the UK

The minimum investment is £15,000. The bank aims to attract consumers with £100,000-2 million of investment available – the so-called “mass affluent”.

UBS worked with an external design agency to crystalise the idea of SmartWealth, but the solution itself was built in-house, “to gain experience”, says Williams. “It was built from the ground up fully focused on client needs. Client first!”

There is a team of 70-80 full-time staff working on SmartWealth at the London office of UBS. Part of the team came from within the bank (“we picked the best from UBS”) and part was recruited from outside the company.

“Everybody is sitting together and encouraged to work collaboratively as we’ve tried to create a fintech start-up culture for SmartWealth,” Williams explains.

“The start-up culture enables us to begin with the question: ‘Why?’”

He believes this approach has also resulted in SmartWealth being brought to market within just a year. “Within a large organisation such as UBS this is a very fast timeline. It is a fintech timeline,” he says. “We always get asked by people in other big corporations how we managed to do it!”

He says that the bank is working closely with the UK regulators: being the first of its kind in the UK, SmartWealth is being “closely monitored”.

The solution was built for international markets from the outset, so a roll-out to other countries is anticipated. “We just want to make it first a success in the UK as it is a great market to start with,” says Williams.