A plethora of mobile wallets and payment apps are expected to flood the market in the next two years, and the sheer number of choices are likely to “confuse” many consumers, who ultimately might look to their financial institutions to be their mobile wallet provider, according to a recent report by Javelin Strategy & Research.

A look at a few key statistics helps explain the coming flood. Mobile retail payments, both online and at the point of sale, are expected to total $180 billion in 2016 and balloon to $410.5 billion by 2020, according to the report, “Mobile Payments Convergence: Opportunities at the Intersection of In-person, Online and P2P Payments.” What’s more, the percentage of consumers who reported using a mobile wallet in the last 30 days has grown from 12 percent in 2014 to nearly one in four in 2016, which equates to 40 million Americans who have used a mobile wallet.

Mobile wallet and app providers, present and future, will be focusing more attention on mobile online payments than on proximity payments at the point of sale, Javelin predicts. While mobile proximity payments are expected to total more than $90 billion in 2020, retail payments via mobile apps/browsers are projected to reach $318.8 billion during the same period. “If you’re following the money, as they say, mobile commerce is the place to look right now, and it’s why we’re seeing the major wallet providers shift their focus to enabling online and in-app payments as much as growing proximity payments at the point of sale,” says Emmett Higdon, director of the mobile practice at Javelin. 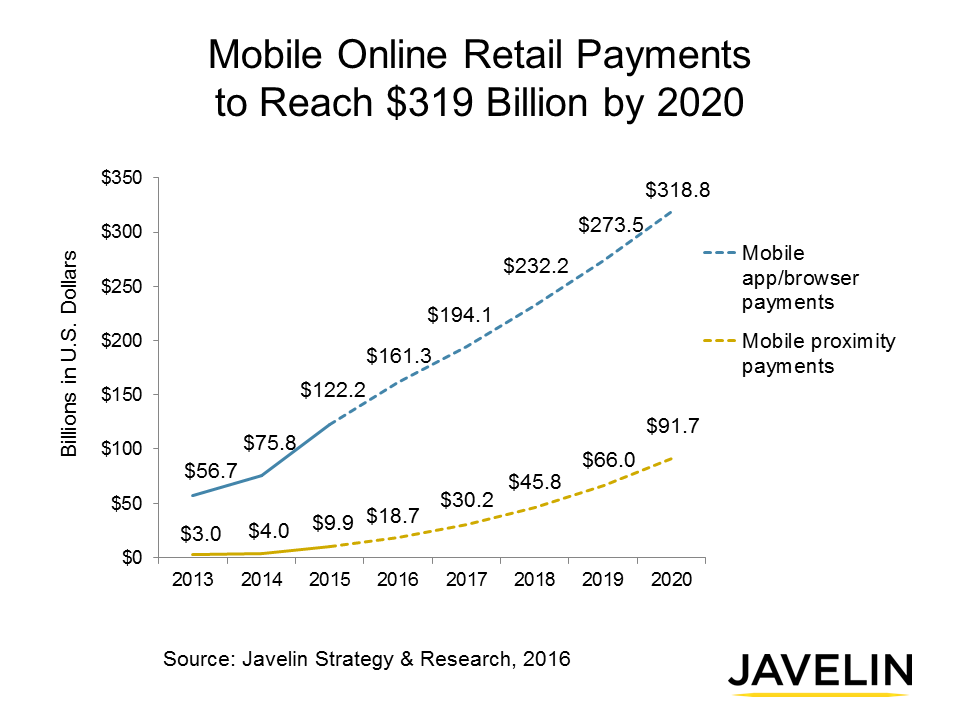 Those lofty mobile online retail payments projections will be the reason for a “flurry” of new payments wallets and apps inundating consumers, who might end up having a payment card stored in several different wallets or apps. But, consumers value simplicity as much as convenience, says Higdon. After the coming deluge of m-payment choices from banks, merchants, tech companies and device manufacturers, Javelin expects a gradual consolidation to payments wallets and apps that can streamline payment choices for consumers by providing a single app that enables them to buy online and in-store, and send and receive P2P payments.

Higdon says consumers will prefer to turn to their primary FIs for this level of functionality, which provides a great opportunity for banks and credit unions that can more easily integrate banking services, such as account balances and mobile check deposit, with other features found in retail apps. For example, Chase’s recent launch of an order and pay-ahead service for consumers using their Chase Pay mobile wallets at what will be thousands of restaurants through its LevelUp partnership.

By 2021, Javelin expects banks and card issuers to take control of the wallet space. “They ceded the early ground to all the major ‘Pays,’ Android Pay, Apple Pay and Samsung Pay,” notes Higdon. “As consumers come to expect more functionality from mobile wallets, integration with account management and money movement functionality will play into the hands of card issuers, banks and credit unions. As merchants continue to explore different value propositions with consumers, [FIs] would be wise to identify which features are resonating most strongly with consumers and look to add similar functionality to their own wallets,” he says.