Indications continue to be positive for gift card sales this holiday season, with a recent report coming from Mercator Advisory Group predicting a bounce-back year from 2015, and research from the UK Gift Card & Voucher Association (UKGCVA) highlighting the popularity of digital gift cards, regardless of season.

Mercator is predicting loads onto closed-loop gift cards in the U.S. during the holiday season of Nov. 1 through Dec. 31 will reach $48.3 billion, a 3 percent increase compared with $46.9 billion during the same period a year ago. The forecast is based on interviews with retailers and industry experts, and consumer surveys.

The increase in loads can be attributed to several factors, according to Ben Jackson, director, prepaid advisory service, Mercator, and the report’s author. The most current reason is the presidential campaign. Regardless of who consumers voted for, the campaign season was tough on everyone, and Jackson suggests to Paybefore that “people are wanting to get over what we’ve been through and be celebratory” by spending and giving more.

Consumers also are feeling better about their finances. Mercator refers to a survey sponsored by Synchrony Financial indicating that among consumers who plan to spend more this holiday season, nearly half said it was because of “improved personal finances and increasingly longer [shopping] lists.” What’s more, two-thirds of shoppers plan to give gift cards and nearly one-third plan to give more gift cards this year than in 2015, the study notes.

The more than $48 billion loaded onto gift cards Mercator is forecasting for this year is not just consumers, but also retailers who are moving away from providing deep discounts like they did last year and are offering gift cards as promotions, instead. 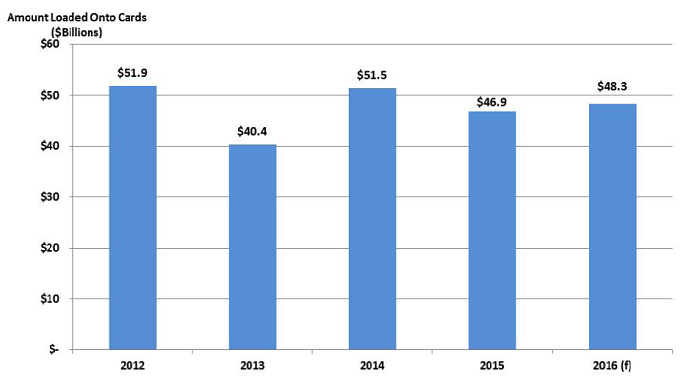 “Retailers have told Mercator Advisory Group that discounts and sales were emphasized in 2015 as a way to win customers,” according to the report. “Although discounts will remain an important part of retailers’ strategies, many see opportunities to drive both current and future sales with gift cards, which discounts can’t do.”

“Gift cards are the one promotion that can bring people in twice: first to buy an item that earns them a card, and second, to redeem the card they earned,” Jackson says.

The survey, conducted by Verdict Retail, also indicated that 28 percent of baby boomers had redeemed gift cards or vouchers online 6 to 10 times within the past year. “The figures uncovered an unexpected change in buying patterns, with baby boomers preferring to receive and use digital options compared to  millennial children and grandchildren,” according to the report.