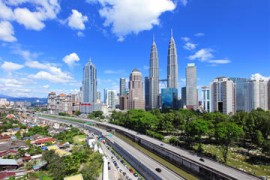 Kuala Lumpur, home of Finexus and a new RTGS system for Asia Pacific

Malaysia-based payments solutions provider Finexus is building a new real-time gross settlement (RTGS) platform for banks in Asia Pacific. It has partnered with Volante Technologies, which will provide the MT to MX message transition, via its flagship Volante Designer product.

Joel Choo, EVP at Finexus, says the company went through a “stringent evaluation” process and was “impressed by Volante’s open architecture and independence”. The vendor’s experience in working with large financial institutions and national infrastructures was also an advantage, Choo adds.

Volante says the venture – the first in the region – “is a significant multi-year implementation at a central bank and is part of a larger, global internationalisation and modernisation process, to build and maintain RTGS and scripless securities settlement systems in the Asia Pacific region”.

The new platform is currently in the implementation mode and “is anticipated to provide the central bank’s customers with a choice of message formats when accessing settlement services”.

End-users will not need to change their own message standards integration to their internal or source systems, emphasises the vendor.

Volante Designer will bring automatic documentation and access to more than 80 pre-built message maps in compliance with ISO 20022 standards.

It will also enable Finexus to maintain its own individual, national standards used as part of the central bank’s settlement service, says Volante, thus reducing dependence on third-party vendors.

Busy times
Volante has been busy on many fronts.

Earlier this year, it launched a new “plug and play” solution – as part of its VolPay Foundation payments platform – for integration with Ripple’s distributed ledger technology.

It has also made inroads into Turkey, with a partnership agreement with local IT firm Payfessional. The tie-up will see Payfessional offering Volante’s VolPay suite of payment integration and processing solutions to the Turkish banking market.