Clearing and settlement: a moving target 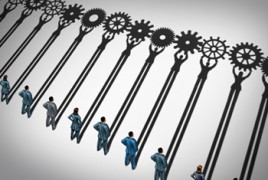 Clearing and settlement: a moving target

Momentum is building behind the T2S securities settlement system as it gains critical mass. While expected benefits and outcomes have not fully materialised, the unexpected benefits have captured the imagination of the post-trade industry.

It has taken a decade for the European securities industry to usher in Target2 Securities (T2S), the European Central Bank’s single, pan-European platform for securities settlement in central bank money. T2S has been costly; the ECB estimates the migration and running phase of the project will cost it €9.3 million annually between September 2014 and September 2021, while the four central bank operators of the platform will spend €50.7 million.

Earlier this month a critical mass of settlement volume went live as Euroclear’s central securities depositories (CSDs) in Belgium, France and the Netherlands migrated to T2S. Says Philip Van Hassel, T2S programme director, Euroclear: “The migration was extremely successful and is currently running smoothly. This was the result of a lot of hard work on the part of the Eses markets and all stakeholders including the CSDs, national central banks and the ECB. The entire market was well prepared for this migration.” He describes T2S as a project that has good interaction between all of the players involved, with disciplined and well-maintained dialogue. “I think the industry has been helped by the T2S governance structure because the rules have been very explicit right from the start.”

The next significant migration comes in wave four in February next year as Clearstream Banking Germany joins the platform. The organisation welcomed the successful Euroclear migration and says T2S is gaining momentum. “With its own migration drawing near, Clearstream is making sure that it is in constant communication with its customers, and together with them is looking forward to its own smooth and successful migration in February 2017.” To date, Clearstream has organised three migration weekend dress rehearsals together with Swift, the ECB and other wave four CSDs and national central banks. “During these tests, all internal targets concerning performance, stability and data quality were fully achieved. The results of these tests therefore confirm Clearstream’s technical readiness for T2S.”

Market participants are hoping that with the fifth and final wave of migration in September 2017 the benefits of T2S will really start to kick in. Tom Casteleyn, head of product management for custody, cash and FX at BNY Mellon, says Euroclear’s migration, the third wave of migration, “represents a tipping point which will enable the market to evaluate whether the T2S project justifies the investment companies have made in the platform”. The Euroclear migration, he adds, provides the first meaningful picture of the project’s capabilities.

The successful migration of Euroclear’s CSDs and of the VP CSDs in Denmark and Luxembourg will give the market confidence to push ahead with T2S initiatives, says Casteleyn. “It will also allow custodians to develop the products and services that will facilitate more efficient clearing, settlement and collateral management.”

Alan Cameron, head of relationship management, international banks and brokers, BNP Paribas Securities Services, says global custodians and asset servicers have been more innovative than investment banks and broker dealers when it comes to T2S. They have changed business models in order to take advantage of the opportunities T2S will bring and regional European banks in particular have engaged very strongly with T2S.

“Our survey showed there is cautious optimism in the industry about T2S; people appreciate it is a long-haul project but that it will ultimately deliver benefits once all three of the main markets have migrated on to the platform,” says Cameron. “Initially the expectation around T2S was about settlement cost savings. But as time has gone on, the industry has realised that the real cost savings from T2S will be delivered by changes in operational procedures – financial institutions know they will not get benefits unless they take action.”

Satvinder Singh, head of Global Securities Services and of GTB Emea ex Germany at Deutsche Bank, describes T2S as a journey. “The benefits will become more apparent and relevant as the migration waves progress. While some settlement fees have reduced, an objective of T2S, other CSD costs have increased. But the focus of the industry is no longer just about fees. There is a greater awareness that liquidity and collateral benefits can be realised within T2S.”

The BNP Paribas survey identifies this change in emphasis in the industry. Many post-trade industry participants believe that rather than going down, settlement costs may rise in the short-term as the costs of T2S development are recouped.

T2S seems Teflon-coated; delays in the roll out and the likelihood of increased settlement costs have not fazed the post-trade industry. Rather, the benefits that will be delivered around liquidity and collateral management are considered so attractive they have negated the challenges that have been met on the road to post-trade centralisation.

Hugh Palmer, director, business solutions, core custody at Societe Generale Securities Services, says the delays to the project (specifically Euroclear’s delayed migration) have given market participants more time to test, train staff and make internal and external operational changes. The downside is that there is an increase in project costs, which in a competitive environment cannot be passed on to customers. He believes smaller custodians may struggle with this. “There also has been a stagnation in terms of market dynamics as a number of clients have adopted a wait and see approach. Some of these organisations may thus not make any T2S related moves until mid-September 2017.”

BNP Paribas’ Cameron believes the liquidity management aspect of T2S – which was not anticipated at the beginning of the project – is becoming more important. “The benefits are spread across the T2S user base; both broker dealers and global custodians will have better visibility of their liquidity and will be able to manage this better.”

The greater efficiencies that will be delivered by collaborating with a regional provider who leverages a single central bank cash account could result in liquidity savings of between 25-30 per cent, says Singh. About 75 per cent of settlement volumes have moved into the overnight cycle, reducing intraday liquidity requirements; a significant gain for Deutsche Bank and its clients, he says. “T2S features such as auto and client collateralisation will also enable providers like us to further enhance liquidity through collateral mobility, reducing the pressure in the marketplace on high grade collateral.”

The ability to pool settlement liquidity in central bank money from multiple markets in one single account will enable financial institutions to redesign funding models, says SocGen’s Palmer. The French bank is doing this both as a custodian and as an investment bank at group level. “Our model will reduce the fragmentation of settlement and liquidity pools, which is a response to the Basel III requirements,” he says.

Tony Freeman, executive director, global industry relations at Omgeo, says the collateral management aspects of T2S are an “unforeseen benefit” of the platform. “The impact of an increase in settlement costs will be marginal versus the increased efficiency and automation that will be possible with collateral management transactions, which are very high cost, very manual and operationally risky.”

T2S will introduce a huge amount of variability in the post-trade world, says Singh. Service providers need to adopt an open architecture, plug and play approach to give customers the flexibility to choose a solution that is right for them. “There is no one solution we present to customers – we can offer asset servicing only, account operator, or any other combination. T2S is providing a very advanced infrastructure for Europe.”

Euroclear’s Van Hassel adds: “We are now in a new world and it is great to have finally arrived. In this new competitive world, both existing and potentially new market participants will have to reposition themselves to remain successful. Euroclear has developed its service offering to make sure our clients can access post-trade facilities in as flexible a way as possible.”