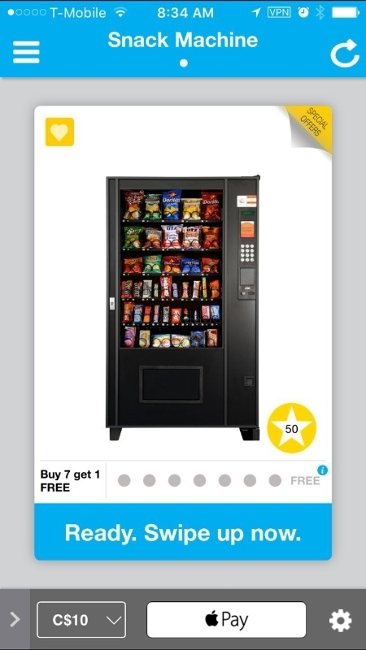 Mobile payments are coming to more vending machines in the U.S. and Canada, thanks to partnerships between vending operators in both countries with automated retail payments provider PayRange. In Canada, all vending machines operated by the Canadian National Vending Alliance (CNVA)—comprised of the nine largest independent vending companies in the country—will be outfitted with PayRange’s BluKey dongle, which accepts contactless mobile payments made via the PayRange app. The app itself—available for iOS and Android—can be funded with credit and debit cards, as well as Apple Pay. The CNVA alliance comes less than a week after PayRange struck a deal with American Food & Vending, which operates vending machines in 35 U.S. markets, to roll out mobile payments across AFV’s entire network, after two successful pilot programs.

Vending could be a promising market for mobile payments, which enable operators to accept cashless purchases without the expense or complexity of installing card readers and network connections, the CNVA noted. Average ticket sizes of mobile sales at vending machines have been found to be 15 percent higher than cash-based sales, according to data from USA Technologies, another provider or mobile payment technology for the sector. Meanwhile, offering mobile payments at vending machines a given consumer is apt to use on a regular basis—such as an office vending machine—could increase consumers’ comfort level with making contactless payments in general. The integration of loyalty programs also is expected to help drive mobile vending payments.