InComm: Nearly 70 Percent of Vacationers Use Prepaid Cards for Convenience 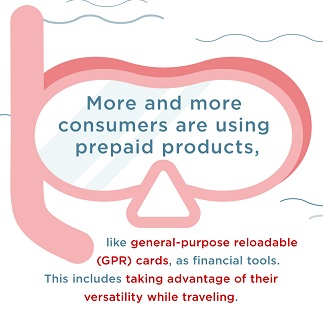 As consumers pack up their cars or board their planes for summer getaways, prepaid cards will be just as important as sunblock or a comfortable pair of walking shoes. Many travelers plan to bring prepaid cards because of convenience, security and budgeting, according to an InComm consumer survey.

“The summer travel season is a perfect time for consumers to take advantage of prepaid products for self-use, whether it is for ease of convenience, to properly budget for a trip or to defend against identity theft while away from home,” said Brian Parlotto, InComm sales and marketing executive vice president.

Convenience was the overwhelming reason given by respondents (69 percent) for using a prepaid card while traveling. One-fourth of respondents would use a prepaid card for children’s allowances. Additional reasons given were to avoid identity theft and fraud at 48 percent and 47 percent, respectively.

Nearly half of respondents (47 percent) would use a prepaid card as a budgeting tool while traveling, and that percentage increased to 55 percent among millennials (ages 25 to 34). “More and more consumers are recognizing and utilizing prepaid products as versatile finance tools,” Parlotto said. The survey also noted that outside of the travel season, 44 percent of respondents use prepaid cards to track expenses.