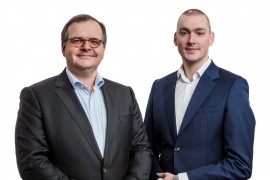 Asset management firm Robeco has released its findings and views on the much-discussed subject of blockchain. The overall theme is to be sensible, study the facts and not fall for the hype when it comes to this emerging technology.

The report, “Distributed ledger technology for the financial industry. Blockchain administration 3.0”, has been created by Patrick Lemmens, portfolio manager, and Jeroen van Oerle, trend analyst, at Robeco New World Financial Equities (a fund that invests in trends in the financial sector).

“Let’s all come down a bit,” says Lemmens. “It is a very promising technology that could really shake up the financial sector. But blockchain is more likely to be evolutionary than revolutionary and to have an innovative impact rather than a destructive one.”

Van Oerle adds: “I think it’s a hype. The short-term impact of the technology is being over exaggerated.” However, he feels that blockchain is here to stay and its long-term impact should not be underestimated.

He refers to distributed ledger technology as “Administration 3.0”.

“The decentralised aspect is extremely important and will result in a surge in efficiency and innovation”, Van Oerle thinks.

With so many companies involved in blockchain (see the pic below), which ones might be the winners and who is not likely to succeed? It is too early to tell, say Lemmens and Van Oerle. “We’ll just have to wait and see which survive and which don’t.” 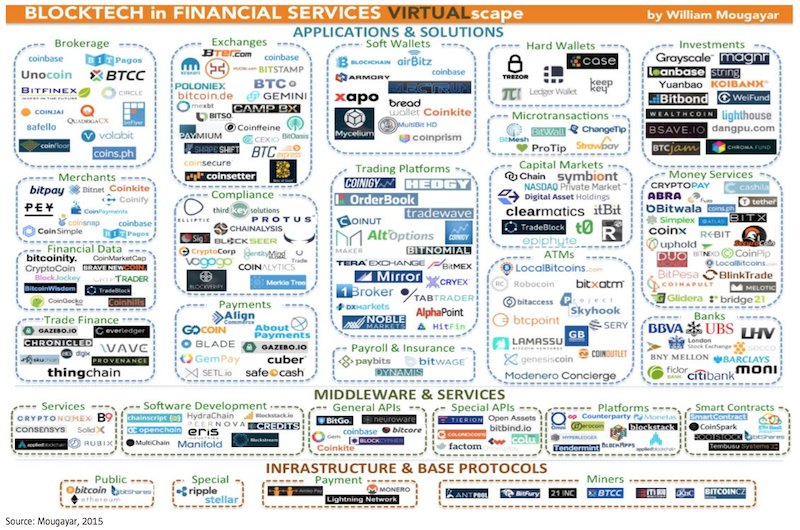 Quick wins
According to the report authors, financial institutions with expensive, labour intensive and time consuming administrative processes where a quick win can be achieved are at risk if they ignore blockchain.

Corporate processes or intermediaries that offer no added value in the chain will be eliminated.

The area of international transfers is one of those quick wins, says to Van Oerle. “International payments are not yet very efficient. Blockchain can simplify and speed up the transfer of instructions and money.”

He expects to see competition in the asset management chain between stock exchanges and custodians vying to become the validator hub for blockchain transactions.

Lemmens feels that easy implementation and quick wins with blockchain are somewhat further off in the insurance world. For him, the “most obvious example” is in the insurance space, for products like insurance for delayed flights or the effects of the weather.

“As an investor, I am cautious about insurers that only offer straightforward products that are easy to digitise,” he comments.

No-go areas
Blockchain does not work for everyone in the financial sector, Lemmens states. For instance, it is not suitable for a transaction that must happen instantaneously, like a payment. “Visa and MasterCard’s networks and processes are much faster than blockchain for this,” he notes.

To invest or not to invest
Lemmens invests in digital technology developers for the financial sector.

In this sector, there are distinctions between those being threatened and those taking advantage of the opportunities, he observes.

“It’s not clear whether the services of ‘old’ IT companies like IBM, Accenture and Cognizant will still be necessary in a ‘blockchain world’, or whether they will be able to adjust their business models in time and compete with ‘new’ tech companies that are working on their own blockchain applications.”

Investing in blockchain companies isn’t easy at the moment, as those involved are mostly small and – as yet – unlisted companies. However, the listing of a blockchain developer just for the sake of it is not a good move either.

“I am hoping for a ‘sensible’ IPO – a company that has proved its worth, has gone through an economic cycle and is making a profit,” he says. “However, I fear that any IPO that comes will be surrounded by still greater hype. That it will be a company that is not yet making a profit and its stock price will be too high for a venture that has yet to prove itself.”

Distributed ledger technology is not ready to be used yet, van Oerle states. Many elements sill require further development and testing.

He thinks that there are two important aspects you should not lose sight of when following blockchain’s progress: laws and regulation and technical issues.

“The financial sector is already used to plenty of laws and regulations. It will be a number of years before the regulators fully trust this new technology. And the parties using it will have to agree on certain standards,” he explains.

“Banks are already further on than asset managers in this area. I am in no doubt that the technical problems will be solved, it’s just a question of time. Investing in blockchain is a logical next step for financial institutions.”