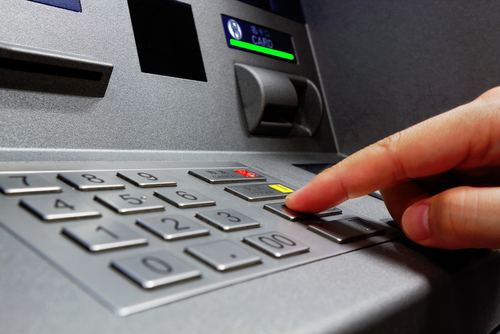 ATMs present a juicer target for criminals, with hacks of the machines increasing 546 percent in 2015 compared with 2014 in the U.S., according to FICO. The credit monitoring firm did not provide the supporting numbers.

FICO said nonbank ATMs have attracted the biggest increase in skimming and fraud, with 10 times the number of those devices compromised in 2015 than in 2014. Those nonbank machines accounted for 60 percent of compromised ATMs in 2015.

FICO also found that ATM compromises tended to last 14 days in 2015, down from 36 days in 2014. “Criminals are taking a quick-hit approach to ATM theft and card fraud,” said TJ Horan, vice president of fraud solutions at FICO. “They are moving faster to make it harder for banks to react and shut down the compromises.”

Banks, consumers and ATM operators cannot rely on the continuing and early rollout of EMV chip card technology in the U.S. to protect them. EMV cards, which still have magstripes on the back, face vulnerability when used used in non-EMV machines. Consumers in the heartland cannot rely on their relative geographic isolation either. FICO founds that “ATM compromises in 2015 also spread out across the country, whereas in 2014 the compromises were concentrated in large cities on the East Coast and West Coast.” Horan said ATM operators need to increase the frequency of their inspections, looking carefully for any signs of tampering.