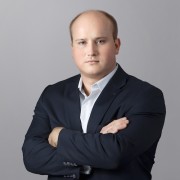 Mike Lobanov, partner at Target Global, takes a look at the recent fluctuations in Lending Club’s share price to assess the impact on the peer-to-peer (P2P) industries.

The P2P lending platform Lending Club is proudly the largest platform of its kind in the US. Founded in 2007, it successfully raised in excess of $390 million before taking the leap onto the public markets and conducting its IPO in December 2014. Opening at just under $25 a share, the company’s value has slowly declined in what have been very volatile public markets. The firm saw its share price drop by more than 50% from $14 to $7 between December and February, when it announced it latest earnings. Since the earnings announcement accompanied by a $150 million buyback, the share price has risen above $8.

The company had a market capitalisation of $10.1 billion when it first listed, yet today it sits around the $3 billion mark. With such a tail off in just over twelve months, it provides ample reason to investigate the circumstances that have led to such a decline and the impact this has had on the broader P2P industry.

The below table compares the performance of the company between 2014 and 2015, this data is normally closely linked to a listed firm’s share price. As is evident, Lending Club actually doubled its business volumes and maintained a positive net income. It is features such as this which makes the fintech sector so attractive for investors. Because financial transactions can be conducted completely online, lenders’ net income margins can not only reach, but exceed 30%, something Lending Club could well do in the near future.

With such solid performance, which in many cases exceed forecasts of growth, why is it that the company continues to lose significant share value? It would seem that external circumstances are having a greater impact than internal ones.

The price of a Ponzi
Fintech, like the traditional financial services industry before it, has to fight back against fraudsters who seek to exploit the huge sums of money that swirl around the globe on a daily basis. At the start of February 2016, Ezubao, one of China’s largest P2P platforms was exposed as being a classic Ponzi scheme with approximately 95% of loan applications on the platform being false.

With more than 20 senior staff arrested, the event not only damaged those who had invested on the platform (reports in the media total losses at $7.6 billion), but the P2P industry as a whole. Following the discovery of the fraud, Lending Club’s shares fell 8% whilst shares in Yirendai, a subsidiary of Creditease and the first public P2P platform in China, dropped a huge 29%.

The knock-on impact of this event on P2P lenders around the globe is unfair. Where Ezebao’s management ran riot thanks to the relaxed regulatory environment they were working in, firms such as Lending Club and Prosper in the US or Zopa, Ratesetter and Funding Circle in the UK operate under a strong regulatory environment. In the US, P2P platforms are forced to adhere to rules such as maximum loan size ($35,000) and to maintain up-to-date information on all loans granted through the platform. Thanks to the Securities and Exchange Commission (SEC) in the US and the Financial Conduct Authority (FCA) in the UK, the P2P lending industries are incredibly well monitored and scrutinised.

The clash of traditional and modern
Lending Club’s share price fell upon the release of news that Santander was selling around one billion loans which it had purchased through the platform. Santander claimed its actions were driven by the substantial losses it had incurred by expanding its consumer lending. Although this could be seen as a negative for Lending Club, the decision to pull out by Santander had little to do with the P2P market, but was an attempt by the bank to mitigate risk in a sector which it held relatively little experience in.

JP Morgan successfully purchased the loan book from Santander at a premium to par value of the loans, which suggests the Lending Club loans are actually sound. However, the negative PR impact of a major bank pulling out from the platform still remains and these perceptions take time to shift.

Legal issues
Following the drop in share price to around $10 per share, Lending Club has had to contend against a number of legal firms declaring an investigation into the accuracy of the company’s investor communications. The California Department of Business Oversight (CDBO) has contacted Lending Club and practically the whole alternative lending industry (Prosper, PayPal, Funding Circle and many more) to respond to questions in their investigations. Naturally, any regulatory interference will impact on the share price of a company, although given the broad nature of the CDBO’s actions, it is likely that the lenders are supporting a general investigation rather than specific issues on each of their platforms. However, as with the Santander case, the perception created by the news story is that Lending Club as a platform is grappling with some severe issues.

Loans, with interest
Lending Club has also raised the rates on its loans twice since the back end of 2015. First to keep up with a rise in the US Federal Reserve System rate and secondly to improve its risk assessment. The below table highlights the extent of the raise. 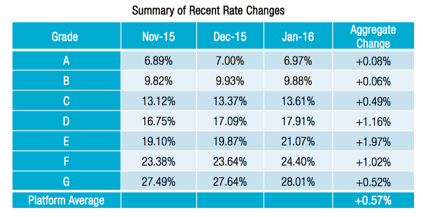 Also, recent analysis by Lending Club Advisors, a subsidiary of Lending Club, published information suggesting defaults on a segment of Lending Club loans actually accounted for 8% of the book, not 4% as expected. Although this data in isolation doesn’t allow for any conclusions to be drawn, the fact that the default number is double brought into question the methods Lending Club uses to score risk.

As a result of this, Lending Club had to take to its blog to allay fears about its risk scoring practice and demonstrate that the error was in the Lending Club Advisors presentation. It would appear that bad copywriting ended up costing Lending Club around $100 million in market capitalisation. The sharp volatility in this is almost largely based in a lack of understanding in the P2P lending sector.

Following its earnings announcement in February 2016, Lending Club shares have risen a small amount, but still sit some way beneath their IPO level. The company has had to contend with a “perfect storm” of negative events throughout the end of 2015 and beginning of 2016, but this isn’t all doom and gloom. Fundamentally, the business is sound and is growing at a considerable rate. The P2P industry is one area of fintech which had genuinely captured the imagination of the consumer, which in turn means it is properly regulated. As with the succession of bad news, the conditions are also there to create a “perfect storm of positivity” and ensure that Lending Club and many other P2P lending firms will become an everyday staple of our financial services industry.