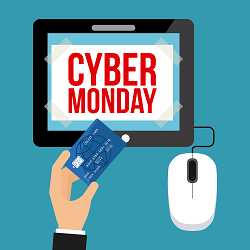 The online retail numbers keep rolling in as the holiday shopping season launches into high gear, and more shoppers than ever are making purchases online. Black Friday sales kicked things off with a bang—especially for Amazon. The online retail titan dominated Black Friday online sales, accounting for 35.7 percent of all U.S. e-commerce spending on Nov. 27, according to Slice Intelligence, an online retail consultant. Best Buy was a distant second, with 8.23 percent of total online sales volume, followed by Macy’s, at 3.38 percent. Walmart and Nordstrom rounded out the top five, at 3.35 and 3.11 percent, respectively. Overall, online Black Friday sales increased 7 percent over last year, Slice said. The days leading up to Black Friday saw online sales volume jump 14 percent as e-merchants started sales earlier in the week. The Wednesday before Thanksgiving saw a 20 percent surge over last year, while online sales on Thanksgiving Day were up 16 percent. Online shoppers also got an early start on Thanksgiving Day, with 5a.m. EST seeing a 40 percent increase in sales volume over the same time period last year, according to a First Data report.

E-retail’s strong showing continued on Cyber Monday—the Monday after Thanksgiving—which was the biggest online shopping day ever, according to research firm comScore. U.S. shoppers spent a total of $3.11 billion on purchases made via phone, tablet or computer—up 21 percent over 2014. The surge was fueled largely by a whopping 53 percent increase in spending via mobile devices, to $838 million, comprising 27 percent of total online spending during Cyber Monday. ComScore projects online sales to stay strong through Christmas, breaking the $70 billion mark for the months of November and December combined.

Millennials are expected to be a main driver of holiday sales volume, both online and in stores. In a recent Discover survey, nearly 43 percent of U.S. shoppers ages 18 to 34 said they planned to spend more this holiday season than they did last year, compared with 22 percent of consumers 35 and older. Millennials will be particularly active in the mobile channel, with 73 percent of millennials polled saying they plan to use a smartphone or tablet to shop. Just 32 percent of non-millennials planned to do so, according to the survey.