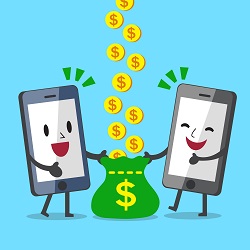 Samsung Pay grabbed attention in the m-payments race with its technology enabling users to pay with their handsets at any POS terminal, whether or not it accepts NFC. And now Samsung is exploring another technological leap that could enable handset-to-handset payments, according to reports.

P2P payments via mobile handsets is a hot area for development, though consumer demand still seems to be lacking. Apple Inc. reportedly is in talks with U.S. banks about adding a P2P service to Apple Pay, the Wall Street Journal reported yesterday.

Samsung has formed a partnership with Korea-based Hankook NFC to develop a service that would enable Samsung Pay users to send funds to one another directly via their phones’ NFC module, using credit cards to fund the payments, according to a report this week in The Paypers. So far the two companies are only in the discussion stage, but a payments module Hankook hopes to patent could enable Samsung Pay users to easily exchange funds to send gifts, split bills or make direct purchases, the report suggests.

It’s not surprising that Samsung is exploring ways to leapfrog ahead of rivals by buying new technology. The central feature distinguishing Samsung Pay from Apple Pay and Android Pay is the way it incorporates magnetic secure transmission (MST), a technology the company acquired earlier this year from LoopPay to make transactions at non-NFC terminals happen contactlessly.

A report also surfaced this month on the wireless handset review Website phonearena, suggesting Samsung may be planning to expand Samsung Pay to work with other manufacturers’ handsets. Samsung Pay currently is available only on the handset maker’s newer, higher end models, including the S6 versions of its Galaxy and Edge devices and the Note 5. But Rhee told ZDNet the m-payments service will be available within the next few months on lower-priced models and smartwatches.