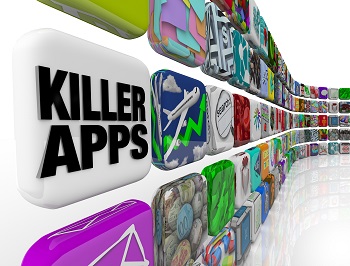 The last year has seen major leaps forward in mobile payments development, with the rollout of Apple Pay, Android Pay and Samsung Pay, but it will take more than mere availability of mobile wallets to inspire their broad usage by consumers, according to payments experts participating on a panel at PayThink in Las Vegas last week. In the “Mobile Payments, Apple Pay and HCE” panel, four payments executives agreed that tapping to pay with a mobile device at the POS isn’t a compelling enough proposition to get many consumers to change their behavior and switch to mobile wallets for routine payments.

“The killer app for mobile payments hasn’t hit yet,” said Doug Yeager, CEO and co-founder of SimplyTapp, the Austin, Texas-based company that played a key role in developing host card emulation (HCE), a breakthrough technology that makes it possible to build mobile wallets without access to the secure element. The key to broad m-wallet adoption will be an app that has immediate appeal to millennials, Yeager suggested. Companies that already have broad connections to consumers, such as Facebook, could possibly add new systems and incentives encouraging young consumers to use existing apps to pay online and at the POS, but so far there’s no big lure for millennials to use mobile wallets, Yeager said. “Apple Pay is still very bank-driven,” Yeager said, noting that it will take “organic” demand from consumers before m-payments will take off widely. Android Pay holds some promise for driving m-payments adoption, but it’s too early to see how it will play out, according to Yeager.

Security also could be a powerful marketing tool for organizations promoting mobile wallets, added Aaron Klein, director of the financial regulatory reform initiative at the Bipartisan Policy Center in Washington, D.C. One of the key reasons Apple Pay achieved traction with a base of consumers when it launched in the U.S. last year was its promise of superior security for online and POS transactions, via the first broad use of tokenization, Klein said. “Apple seemed to understand consumer thinking about payments better than anyone at the time,” he said.

Like all new products, consumers will experiment with a variety of mobile wallets as they evolve and a few that offer the best convenience and rewards will rise to the top, suggested Vince Hruska, senior vice president at Beverly Hills, Calif.-based City National Bank, which targets high-net-worth consumers. “Consumers will use and refine mobile wallets, and ultimately funnel into two or three major options,” he predicted.

It’s far too soon to predict which of the available mobile wallets may win, concluded Leon Majors, senior vice president of Salisbury, Md.-based Phoenix Payments Systems Practice, a market research firm. “Our research suggests that most Apple Pay users aren’t fully satisfied with it, and consumers aren’t getting what they want yet from existing mobile payment options.”