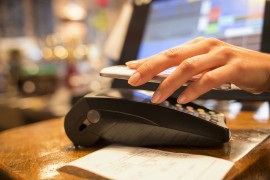 Visa Europe says that uptake of contactless payments in Europe continues to climb with more than one billion transactions made in the last year. Visa cardholders spent €1.6 billion in March 2015 alone – a three-fold increase over the same period in 2014.

In the month of March 2015, the leading European market for Visa was the UK with 52.6 million transactions, followed by Poland (49.7 million) and the Czech Republic (13.9 million).

Currently the biggest use is for low value purchases (below £20 in the UK) where no further authorisation is needed. Visa says that in countries such as the Czech Republic, Poland and Spain, where cardholders can use contactless to pay for any value by touching to pay and entering their PIN on the terminal using are using contactless to pay for higher value.

Higher value contactless payments will continue to roll out at merchants across Europe, paving the way for mobile NFC payments, as banks and major companies launch mobile payment products throughout the rest of the year.

Sandra Alzetta, executive director of core products at Visa Europe, said: “Across Europe, usage levels have soared, with more than one billion contactless transactions made by Visa cardholders in the last 12 months alone. The popularity of contactless will only increase in future as we experience the next generation of digital payments, where the simplicity and convenience is extended to mobile and wearable NFC technology.”