Faster payments could be the key factor in getting U.K. consumers to switch bank account providers, a new report says. In a study commissioned by ACI Worldwide, 45 percent of 2,000 of consumers polled in the U.K. said the prospect of faster and more convenient electronic payments would encourage them to consider moving their accounts to a different bank. Behind fees, payment delays are one of the biggest sources of irritation for 33 percent of consumers.

“[T]oday’s consumers want fast and easy payment methods. Speed is very important to them, as is convenience,” said Barry Kislingbury, lead solutions consultant, ACI. “Banks have a real opportunity to stand out by offering faster payments and other innovations that today’s consumers covet.” Younger consumers especially covet fast payments, the report found, with consumers between 18 and 34 ranking as the fastest adopters of newer banking services, such as mobile banking and contactless payments. Fifty-five percent of respondents ages 25 to 34 reported using mobile banking in an average month, and 44 percent of that group said they use contactless payments monthly. Those in that age range also are more likely to switch account providers for the promise of faster payments; 61 percent said faster payments would be a factor in switching, compared to just 35 percent of those 55 and older.

Ten major U.K. banks are participating in the Faster Payment initiative, a joint effort between various U.K. payments stakeholders that enables payments to be made between member banks within 15 seconds. However, the ACI study indicates banks may not be doing enough to promote the service; just 23 percent of respondents said they would expect an electronic transfer to reach its recipient within seconds. Another 23 percent expected payment to take up to three hours, while 8 percent expected payments to take up to three days. “This clearly shows there is a need for greater transparency regarding the service levels being offered by banks,” said Kislingbury. “Banks that offer electronic payments in seconds or minutes would seem to have an important differentiator that they are not fully exploiting today.” 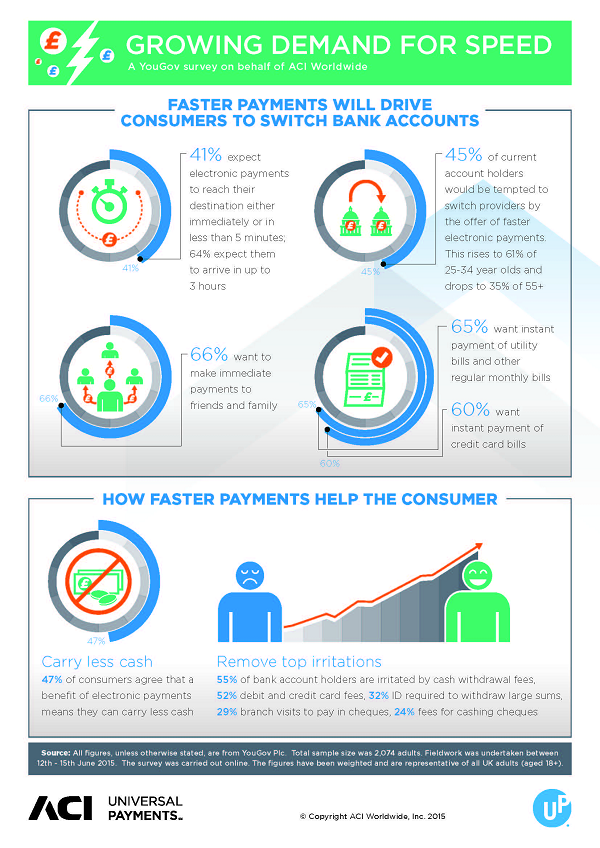