Biometrics and authentication – a new world of possibilities 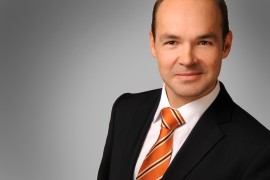 The search for a common, international standard of payment authentication is in full flow, writes Sascha Breite

Governments, retailers, banks and (not least) consumers are all eager to find a means of confirming someone’s identity beyond any doubt, secure from external hacking and technologically reliable.

The situation has become more urgent with the wildfire spread of mobile technology, opening up countless opportunities for remote transactions, but placing a growing burden on payment systems to prevent fraud and theft, both of assets and identities.

So, what are the best ways forward?

Here are some of the key technologies, with an analysis of their pros and cons:

Already in common use at border controls and in many smartphones, fingerprint identification has become widely accepted. But concerns over its reliability and security has dissuaded banks from adopting it for payment authentication.

Some consumers fear that their fingerprint hashdata could be copied and used fraudulently, so they have switched back to pin ID. Younger consumers are more relaxed with the technology and ApplePay can be activated using fingerprint ID.

As technology develops and sensors are more widespread, some are concerned that their fingerprint ID could be captured simply by touching something, without realizing. The technology is likely to remain popular, but probably in combination with other forms of ID.

Another border control technology which is likely to spread into the commercial world, this once again raises reliability concerns. What happens if one’s face alters its appearance? Can someone be impersonated by showing an image of their face?

A number of extra aspects can tighten security: infrared scanners can tell the difference between a live person and an image; a 3D scan of someone’s head provides further authentication; and iris recognition is becoming more sophisticated.

The new ‘Hello’ function on Windows 10 includes a means of unlocking one’s computer simply by looking at it. So the prospect of going to an ATM, looking at it and then getting cash out, may be possible in future (though some people will object to being filmed, on privacy grounds).

Customers taking ‘selfies’ and using these as authentication, either as a still image or a video, is another emerging form of authentication. Recently MasterCard announced plans to pilot this solution and replace passwords in 3-D Secure protected payments.

Like our fingerprints and irises, everyone has a unique heartbeat. Using this for identification has the advantage that is it dynamic rather than static and therefore harder to replicate and proves that you are an actual human being.

The technology is part of many current and emerging devices, particularly for sports and fitness use, providing a ready means of integration with other systems, such as transactions or establishing ID.

Wearable technology, whether for health, fashion or communication, will give this type of authentication further impetus. So we can expect to see more of it in the years to come.

Beyond the technologies employed, there are further debates over whose responsibility it should be to develop any common standard. Governments are an obvious place to start, and indeed they have collaborated successfully to introduce border controls using biometric ID.

Yet transactions involving large amounts of money, especially ones using mobile devices, require greater security than this. People are physically present at border points and have to show their passports, so the biometrics are simply an additional security layer.

Most of the initiatives rolled out by governments using biometric ID authentication for health insurance (for example) have failed to work in the commercial sphere.

Card Schemes such as Visa and MasterCard would love to introduce such a system and have it commonly adopted internationally, since it would increase brand loyalty and probably win them new customers.

But so far, the lack of clarity over what kind of technology will be most widely accepted, by governments, consumers and by the legal world, has prevented any major financial service provider taking a leap of faith. Reliability, security and privacy issues remain unresolved.

In some ways, technology is leaping ahead of the best efforts of governments and banks, through applications like Google Street View and Google Image, where individuals can be identified through pictures taken of them without necessarily having their consent. And commercial services such as Amazon, PayPal and eBay have pioneered slimmed-down ID procedures, which may become more widely adopted.

An ever increasing amount of data is being stored on all of us, which will enable identification through many differing avenues. Irrespectively of the current position of biometrics and technology, it is vital for banking and payment infrastructure providers like SIX Payment Services, to provide high levels of security and reliability. In the near future we can expect further innovations to appear in this space, however it is still unclear which  will form the basis of a single global standard, until the dust has settled from the current burst of activity.