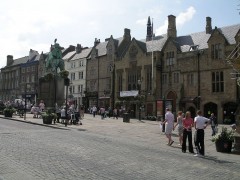 Challenger UK retail bank Atom has received its licence from the Bank of England, meaning it will now be able to go ahead with plans to launch later this year. The bank will add competition to the UK retail banking sector, which until 2010 had not seen a single new entrant for 150 years.

Durham-based Atom Bank plans to begin with mobile-based personal and business banking services, with a desktop to follow. There will be no bank branches and no paper letters or forms. Instead the bank has said it will use biometric security and an app-based account opening service.

Atom’s app will be optimised for mobile and tablet and features a 3D interface, built on the Unity gaming platform. Atom’s customer service team will provide support to customers “all-day and every day”, by phone, chat, email and through social media.

“We’ve set about designing a banking app that’s in tune with how people think about their money,” said Mark Mullen, chief executive at Atom. “Taking an app-based approach allows us to use all the features of your mobile device to provide a slick and highly personalised experience. It will offer total control and transparency with a depth that is beyond anything else on offer in the market today.”

Mullen previously worked at HSBC for 14 years, from 2000 to 2014, most recently as head of UK contact centres.

Atom is part of a wave of new mobile-based retail banking businesses emerging in recent years. Other examples include Moven, which was founded by banking author Brett King, as well as Finish bank Holvi and Poland’s mBank. Interestingly however, the bank which became the first challenger in the UK for 150 years back in 2010 was Metro Bank, which is following a very different strategy. Metro Bank began without a mobile app at all, instead preferring to focus on reinventing retail bank branches as ‘stores’ based on a better customer experience in-branch.