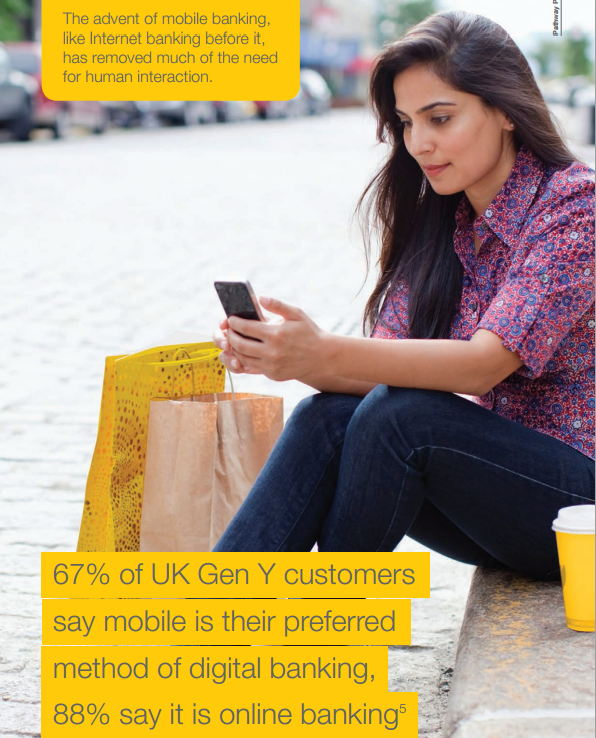 Nearly three-quarters of consumers who use mobile banking say they don’t need a bank branch. At the same time, mobile offers drastically lower transaction costs to a bank. The time is right for a new breed of digital-only banks to enter the market and steal away share from the established players, according to a new report by Monitise.

So-called ‘digital’ banks are defined as ones that make mobile their main channel. Guided by the example of Amazon, Google and the social networks, these businesses are trying to connect with ‘digital-savvy’ consumers by getting in touch with their lifestyle. They also stand to gain from an estimated cost per transaction of 10 cents via mobile, versus $4.25 for a face to face transaction in a branch. Removing the branch means removing much of the overhead, says the report.

Services such as Moven in the US and mBank in Poland have already made a name for themselves with mobile-only businesses. Other examples, such as Holvi, exist in Europe. But Monitise says this is just the start, as mobile banking represents a massive opportunity to snatch away some of the most profitable customers of the future, potentially leaving conventional banks in a dangerous situation.

“Still in its relative infancy as a concept, contenders are beginning to emerge across the globe and they are winning small, but growing numbers of customers – customers in a desirable demographic; younger, more affluent, better educated and representing a higher potential lifetime value,” said the report, The Rise of the Digital-only Bank.

The report adds that while mobile was once a ‘nice to have’ feature, it has now evolved to a point where the availability of individual mobile banking services can be the deciding factor in keeping customers loyal. Monitise notes that in AlixPartners’ most recent Mobile Financial Services Tracking study, 28% of consumers between the ages of 26 and 34 years said they would be likely to change banks to gain access to mobile photo bill pay. It also warns that switching could become more common – an allusion to the UK Payments Council’s Current Account Switching Service, which was introduced in September 2013 in an effort to drive up competition between retail banks.

The decline in bank branch traffic and numbers is well-known in financial services. According to the AlixPartners survey, it is likely to gather pace in the coming years, since mobile banking users reported visiting the branch 39% fewer times per month after adopting mobile banking. Most controversially, Monitise claims that “the advent of mobile banking, like internet banking before it, has removed much of the need for human interaction” – a claim that was contested by speakers at a recent conference in Istanbul, where a representative from a Moroccan bank said that it was still too early to make such a claim in many emerging markets in Africa, and that personal interaction would still be needed. Monitise also pours cold water on Anthony Browne, chief executive at the British Bankers’ Association, who said “Make no mistake; the branch will remain integral to banking services in the 21st century.” According to Monitise, however, it is the younger generation of consumers that will prove Browne wrong.

“It’s no surprise that the Millennial generation is the most likely to embrace digital-only,” said the report. “Around 66% of Generation Y (born since the early 80s) already use mobile banking weekly or more. Additionally, 40% see mobile banking as a must have – and these numbers are growing.”

The main challenges to the digital-only ideal are ensuring that functions such as remote deposit capture work flawlessly and reliably, ensuring that customer relationships are continually backed up by solid customer service, and that customers feel part of a community, such as Germany’s Fidor Bank, which encourages its 250,000 customers to share their opinions and advice via online forums. Digital banks also tend to place emphasis on personal financial management, so finding ways to turn that into greater engagement – perhaps through social media – should also play an important role.

Despite the threat posed by the new generation of start-ups to the existing industry, there is also a strong possibility of integration. For example, Spanish bank BBVA purchased online bank Simple, giving it a digital-only subsidiary that has the advantages of a start-up company in terms of leanness and time to market. For others, Monitise notes that partnerships could be an effective solution. By opening up their APIs and subscribing to mobile services, banks could get the advantage of innovation without the need for extensive internal development.

“The good news for banks looking to shift to digital is that there’s plenty of help and support to enable them to do so,” concludes the report. “Fintech is at the top of many governments’ agendas, and organisations like Innovative Finance in the Uk and the Open Transaction Alliance in Europe have been set up specifically to foster collaboration, facilitate dialogue and encourage innovation within the financial services sector. Digital needn’t be an insurmountable challenge.”