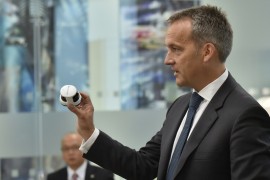 Barclays plans to offer corporate banking users a new security service based on Hitachi’s Finger Vein Authentication Technology from early next year and is considering introducing it to branches for consumers.

The devices use near-infrared light to scan the subcutaneous vein pattern of a user, details of which are stored in a SIM card in the device, allowing multiple users to share a device. Powered by a USB connection, the Barclays Biometric Reader replaces the existing PINsentry device

Barclays will not hold the user’s vein pattern and there will be no public record of it.

Hitachi’s VeinID is already used by banks for password replacement, single sign on and ATM machines, in Japan, North America and Europe.

The launch follows the bank’s introduction of voice biometrics for its Barclays Wealth customers to identify themselves on phone calls, removing the need for passwords or security questions.