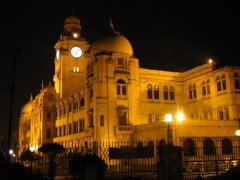 Pakistan’s Faysal Bank has shifted the bank branches it bought from RBS in 2010 onto its SunGard core banking system, as part of a major push to integrate the business.

Founded in Karachi in 1994, Faysal Bank has 265 branches in 70 cities in Pakistan. The bank covers retail, corporate and Islamic banking as well as wealth management for elite clients. Faysal was already using SunGard’s Ambit core banking system for its own operations since 2004, but it still needed to transfer the operations it acquired from RBS in June 2010 to the platform. These consisted of 79 branches and an estimated £615.6 million in deposits.

Originally, the RBS Pakistan business was an independent bank called Prime Bank. In March 2007, Prime Bank was acquired by Dutch bank ABN Amro, which was in turn acquired by RBS in October 2007. Faysal paid RBS just $50 million for the business – an enormous discount compared to the $227.4 million paid by ABN Amro three years earlier.

Meanwhile, Pakistan’s banking industry has continued to grow in recent years, with the grant of new government licences and a state-sponsored push into the emerging Islamic finance sector. At the end of January, the country’s central bank announced plans to double the industry’s branch network and reach a 15% share of the banking system in the next five years, in a strategy clearly aimed at emulating the success of Islamic banking in the Gulf states, where, its market share is estimated at around 25% according to Thomson Reuters.

“Having worked with SunGard for almost a decade, we have first-hand experience of the company’s solutions and services strengths,” said Naved A. Khan, president and chief executive at Faysal bank. “Its commitment to roadmap alignment with client requirements is key to providing the technology needed to help drive our growth strategy. The enhancements to the latest version of Ambit Core Banking have helped us to build sub modules in the system to reduce the number of interfacing applications. This has been integral to helping us simplify and streamline our operations for improved performance.”