George Osborne, the UK Chancellor of the Exchequer, may be a here-today-gone-tomorrow politician, but the essential working of his office goes on as it always has.

Just a day after Osborne vowed to drag the UK payments systems into the 21st century by, er, improving cheque clearing times, a ceremony dating back to the 12th century was getting underway in the City of London.

The Trial of the Pyx involves making sure that coins produced at the Royal Mint are “within the statutory limits for metallic composition, weight and size”. This is done by dragging about 50,000 coins, one from every batch of every denomination put aside during the preceding year, from the Royal Mint to the Assay office of the Worshipful Company of Goldsmiths in the City of London. 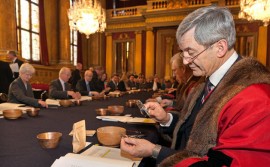 The Goldsmiths' Company provides the jury

The whole business, as is fitting, takes about two months, after which there is the Delivery of the Verdict. This is also presided over by the Queen’s Remembrancer and attended by the Master of the Mint.

Guess who the Master of the Mint is? That’s right: the Chancellor of the Exchequer, a post currently held by that thorough-going bank moderniser, George Osborne.