NEW YORK, May 31, 2022 (GLOBE NEWSWIRE) — The world’s financial health depends on innovative strategies to meet the formidable challenges of our time. Perhaps few understand these complexities more than Blingby CEO Marcia-Elizabeth C. Favale, who answered the call from the governor of the National Bank of Kazakhstan in early 2009 during the financial meltdown. Today, Favale releases her book, a case study, detailing how this international benchmark, The Burden-Sharing Framework, came to be, along with its wider applicability and importance.

In February 2009, trying to navigate the financial crisis, the government of Kazakhstan took a decisive step in restructuring its three banks. Kazakhstan rejected the bailout strategy and rejected a bad bank/good bank framework. Risk, Recovery, and Empowerment: The Kazakhstan Bank Restructure Case Study is a qualitative, investigative analysis, told by the author, a finance partitioner who devised and led the implementation of the over $30 billion Burden-Sharing Framework that became an international benchmark and redefined trade finance by introducing the term and analysis of ‘true trade finance’.

Before creating a tech startup (Blingby) and being awarded U.S. Patents, a Kazakhstan Patent, and Chinese Patents, Marcia-Elizabeth C. Favale (a.k.a. Favale-Tarter) had an illustrious career in finance. She was ranked by Institutional Investor Magazine as the “Top Analyst for Emerging Market Corporate Bond Research” (April 2006). She was the senior advisor to the prime minister of Kazakhstan (2009-2013) and the independent restructuring advisor to BTA Bank and Samruk-Kazyna, with her advisory firm, M.Favale-Tarter LLC listed alongside UBS, Lazard, and White Case: Euromoney Deals of the Year: CEE Regional Awards; Euromoney Magazine (February 2010), amongst other accolades.

Praise for Risk, Recovery, and Empowerment: The Kazakhstan Bank Restructure Case Study
“The bankruptcy petition filed in the United States Bankruptcy Court for the Southern District of New York by Lehman Brothers on September 15, 2008, set off a worldwide economic nightmare. Its shock waves threatened a global depression. Marcia Elizabeth C. Favale’s book, Risk, Recovery, and Empowerment: The Kazakhstan Bank Restructure Case Study walks the reader through how she constructed a “Burden-Sharing” restructuring strategy for three of Kazakhstan’s biggest banks that were teetering on failure in the wake of Lehman’s bankruptcy. Her strategy brought together conflicting interests of key stakeholders (bank management, depositors, shareholders, creditors, and government entities), which resulted in a hard-fought success for these divergent stakeholders and the people of Kazakhstan. We should all learn from Ms. Favale’s strategy.”
–Paul Regan, CPA, author of The Forensic: How the CIA, a Brilliant Attorney, and a Young CPA Brought Down Howard Hughes

“When you combine the emotional intelligence of a great leader, along with the methodologies and control systems of project management, you get the positive outcome that the people of Kazakhstan did. Marcia Favale’s efforts culminated in a masterpiece that now, with this book, we can all bear witness to.”
–Maureen Lippe, Lippe Taylor PR & Digital Marketing 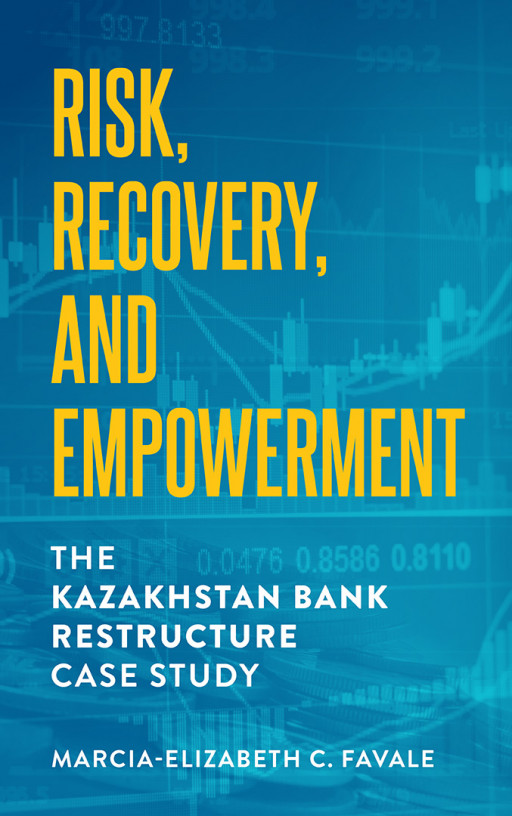