From Bitcoin to Burning Man and Beyond: The Quest for Identity and Autonomy in a Digital Society 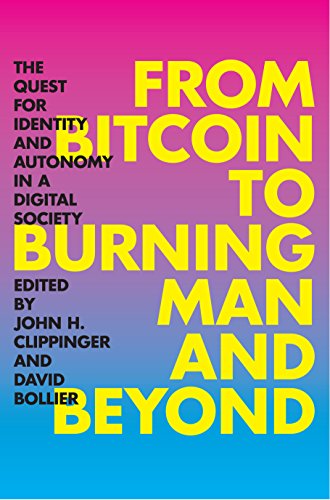 From Bitcoin to Burning Man and Beyond: The Quest for Identity and Autonomy in a Digital Society

What can we learn from Bitcoin and Burning Man about re-inventing money and designing better forms of self-governance?

Why are “decentralised autonomous organisations” the next great internet disruption?

From Bitcoin to Burning Man and Beyond: The Quest for Autonomy and Identity in a Digital Society explores a new generation of digital technologies that are re-imagining the very foundations of identity, governance, trust and social organisation.

The fifteen essays of this book stake out the foundations of a new future – a future of open web standards and data commons, a society of decentralised autonomous organisations, a world of trustworthy digital currencies and self-organised and expressive communities like Burning Man.

From Bitcoin to Burning Man and Beyond was edited by Dr. John H. Clippinger, co-founder and executive director of ID3, and David Bollier, an editor at ID3 who is also an author, blogger and scholar who studies the commons. The book, published by ID3 in association with Off the Common Books, reflects ID3’s vision of the huge, untapped potential for self-organised, distributed governance on open platforms.

One chapter that inspires the book’s title traces the 28-year history of Burning Man, the week-long encampment in the Nevada desert that have hosted remarkable experimentation in new forms of self-governance by large communities. Other chapters explore such cutting-edge concepts as:

From Bitcoin to Burning Man and Beyond also introduces the path-breaking software platform that ID3 has developed called Open Mustard Seed (OMS). The open source programme enables the rise of new types of trusted, self-healing digital institutions on open networks, which in turn will make possible new sorts of privacy-friendly social ecosystems.