A new digital app and wallet has launched in the UK providing Islamic finance. 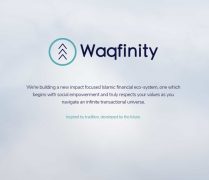 Waqfinity is still in development

Its website, still in development, says the app is focused on social empowerment.

Waqf, Arabic for “endowment”, involves donating a fixed asset which can provide a financial return or benefit.

The practice stems from the ninth century, and is based on several sayings of the prophet Muhammed.

Muslims giving waqf typically donate a building, land, or cash with no intention of reclaiming the value gained from them.

Joining Saleem is Sultan Choudhury, as executive chairman. Choudhury is a board advisor for the UK’s Islamic Finance Council. He spent 15 years as the CEO of UK Islamic bank Al Rayan, leaving in July 2019.