Three of America’s largest banks account for more than half of the $11.39 billion paid by banks globally so far this year in major fines.

Together, Goldman Sachs, Wells Fargo, and JP Morgan Chase paid $7.85 billion of this total, according to Finbold’s ‘Bank Fines 2020’ report.

Finbold classes a ‘major fine’ as anything above $592,000, highlighting that “the real numbers of violations can be drastically higher”.

The most common violation among banks globally in the report was anti-money laundering (AML) breaches. Other fines relate to violations of know your customer (KYC) and operating guidelines, as well as personal data leaks.

The top ten banks with the biggest fines imposed by the regulators YTD: 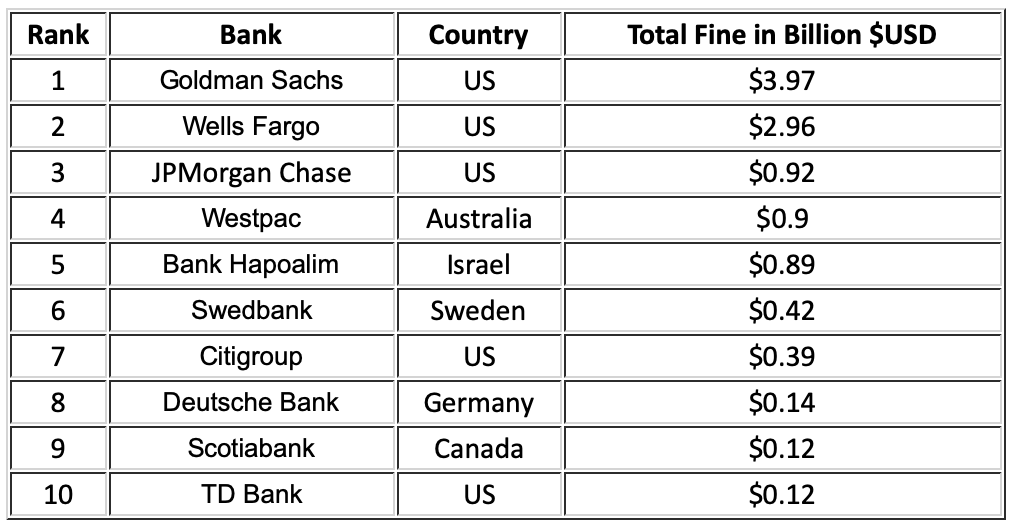 At the top of the table is Goldman Sachs’ whopping $3.97 billion fine in July.

Goldman helped raise billions for sovereign wealth fund 1MDB, which was later exposed as a personal piggy bank for Malaysian officials. The revelation led to the exit of Malaysia’s prime minister Najib Razak. It also led to a foreign bribery and corruption investigation carried out by US prosecutors against Goldman.

According to US prosecutors, the landmark figure is still at least half a billion-short. They allege officials took as much as $4.5 billion from the sovereign wealth fund for personal expenditure.

Wells Fargo was fined nearly $3 billion in February for creating millions of fake accounts in scandal which unearthed more than four years ago.

The second largest fine this year represents nearly a 15-year period – 2002-2016 – in which the bank falsified records, worsened customer credit ratings of customers, misused personal information and raked in millions of dollars in illegal fees and interest.

In other words, just eight US banks make up around three quarters of the overall fine total in 2020.

Are the fines working?

More than 30 banks globally tumbled into fines greater than $592,000 this year, according to the Finbold report.

Other high-listed offenders outside the US included Australia’s Westpac, Israel’s Bank Hapoalim, Swedbank, and Deutsche Bank.

Due to a record year of fines against banks, much of the industry has debated whether such big fines actually make a difference.

And Rachel Woolley, global director of Financial Crime at Fenergo, told FinTech Futures last month: “The reputational damage that can come from a fine is significant. In some cases, it can wipe out shareholder value. We’ve seen this in action with the Nordic banking scandal of the last couple of years.”

But despite US regulators being the most active in terms of fines this year so far – carrying over their top spot from last year, Williams thinks the US is very much a “follower” when it comes to AML technology innovation.

Which means fines will only go so far if banks’ technology isn’t up to scratch. Whilst some banks commit money to better systems following a breach of large-scale AML failure, many more don’t.

And despite its fine coming into being last month, JP Morgan’s stock is steadily rising. Unlike its US peers which have seen revenue drops of around 10%, its revenue in the September quarter fell only 2% year-over-year.

In the last six months, JP Morgan’s stock has jumped 9.44%, according to Finbold.