Finablr, the company which owns Travelex, has asked advisers to prepare for possible insolvency after it emerged that the company had issued $100 million (£81 million) worth of undisclosed cheques.

The cheques were kept a secret from Finablr’s board, made by group companies prior its initial public offering (IPO) in 2019. 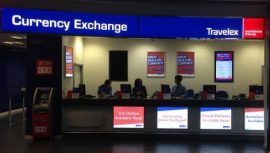 More than 1,500 businesses use Finablr

Not only is Finablr struggling with this growing account scandal, but it has also just announced larger-than-expected financial losses due to the coronavirus pandemic.

It said travel restrictions had weakened its demand considerably and disrupted the transport of cash through its platforms.

More than 1,500 businesses use Finablr, and last year it says it processed $115 billion in transactions.

Finablr’s board has opened talks with an accounting firm, according to the Financial Times, which cites the company’s intention “to undertake rapid contingency planning for a potential insolvency appointment”. The focus now is on trying to maximise the group’s revenue.

Chief executive at Finablr Promoth Manghat stepped down on Monday, and it is still unclear as to when the company will finalise an agreement with its bank customers which depend on the company’s exchange subsidiaries such as Travelex – the world’s largest retail currency dealer.

The Financial Conduct Authority (FCA) is understood to be in talks with Finablr, according to the Financial Times.

In the meantime, Kroll has been appointed to investigate the ongoing accounting scandal revealed for the first time publicly yesterday.