Set to join the bank sometime in the Autumn, Prestedge will be leaving behind 12 years at Nationwide, most recently as its deputy CEO. 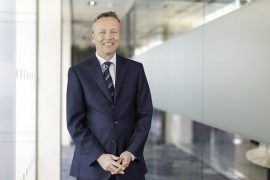 Prestedge, who also worked for a time at Barclays in top leadership positions, will be responsible for overseeing his new employer’s transformation programme.

“I am delighted and excited to be joining a bank with a strong international and global presence and a hugely ambitious transformation agenda,” he says.

The Spanish multinational bank committed €20 billion ($22.2 billion) to a four-year digital transformation in 2019.

The enormous budget has already seen the bank splash $700 million on a deal with IBM, as well as bring in nCino to replace 13 disparate legacy systems in favour of one single, end-to-end solution.

“I believe Tony will be an outstanding addition to the Santander team,” says Bostock. “He has an exceptional track record of delivering transformational change across organisations in our sector and will be a real asset to us.”

At Nationwide, Prestedge was in charge of operational strategy, performance and transformation across customer services, product, digital, and payments to name a few of his divisions.