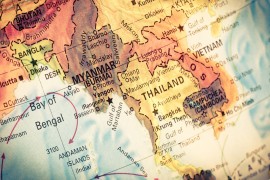 “Myanmar people working in Thailand are foreign currency earners of our country, and their hard-earned money is at risk when they send it home via informal channels,” says U Thein Zaw, Shwe Bank’s executive vice-chairman.

The UN Migration Agency estimates that about three million Myanmar migrant workers live in Thailand; most send money to their home country through informal money-agent networks.

According to Everex, its platform utilises distributed ledger technology to eliminate high remittance fees, reduce money transfer time to under a minute and provide a clear audit trail of the entire transaction.

The Thailand-Myanmar corridor is the first one, and both companies intend to expand this tech to other Asian countries. No timelines or details on such plans.

Everex believes that this partnership “strengthens both companies’ exposure within the Association of Southeast Asian Nations (ASEAN) market”.