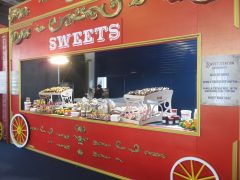 “It’s unfortunate how polarised the community has gotten. This doesn’t have to be winner-take-all.” This was one view about the cryptocurrency world from David Schwartz, chief cryptographer at Ripple, on the second day of Money20/20 Europe.

Yesterday (5 June), at the RAI exhibition centre in Amsterdam, FinTech Futures watched and listened as the industry gave its verdict on crypto-current affairs.

It seems just as regulators seek out their peers for friendships, and banks and fintechs cosy up, the crypto crowd can conceivably follow suit.

On the panel, “Currency or commodity – how do we approach the shapeshifter that is crypto?”, Schwartz was joined by Coinfloor, Colu and Overstock.

Schwartz sees a future where coins specialise and do something very well, and then “we’ll need interoperability”. This latter opinion was quite common during the day. He also felt that the market is “dominated by ideology” and that Bitcoin and Ripple’s XRP both have a place in the market.

Another view from the panel was that the market has become “very tribal”. Whether this will change at next year’s show will be interesting to see.

An audience poll asked what are cryptocurrencies? 61% say it’s more nuanced as they can change, 18% see it as a commodity, while another 18% see it as currencies – hence the name.

Other key points included “we need a common taxonomy” for standardisation and “there are many blockchain use cases, but I’d like to see more”.

On the panel, “We.trade: Creating standardisation, collaboration and consensus across banks”, it was all about promoting this consortium. As reported last year, IBM and eight banks unleashed the we.trade platform for blockchain-powered commerce. (Nordea joined in December to become the ninth bank.)

One of the key points from the panel – which included UniCredit, KBC, Rabobank and IBM – was that the physical movement of goods is still faster than the paper documents.

It was also noted that the platform didn’t have to be on distributed ledger technology (DLT)/blockchain, it could be any centralised system.

According to we.trade it will launch its live product this month. 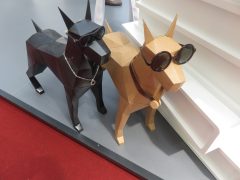 At the next discussion, which included ConsenSys, “From beyond the headlines to under the bonnet; the mechanics of the blockchain”, a quick survey gauged the audience’s involvement in this technology.

Here, 37% expressed having knowledge, while 33% considered themselves beginners.

There were more polls to get a handy insight into the crowd’s state of mind.

In terms of their main blockchain interest, Ethereum edged ahead with 33%, compared to Ripple with 30%.

And when it got down to the nitty gritty, as to what cryptocurrencies people own, 48% said Ethereum, 34% “other”, and 31% Ripple’s XRP.

Some of the more notable points from the panel members ranged from “banks are afraid of blockchain and they are not innovative” – to “I try to avoid talking to a bank’s IT department or management, but directly with P&L”.

The view of Jeremy Millar, chief of staff, ConsenSys, is that blockchain can now do 200 transactions per second and this will cover 80% of use cases in financial services right now.

Moving on, the next panel, “Decentralising power is the only truly transformative element of the blockchain, everything else is just hype”, got straight to the point.

The audience were asked what is a blockchain? 65% saw it as the future of financial services, while 28% perceived it as a glorified database.

Quite often at events, delegates ask for exclusive blockchain use cases. R3, who were on the panel, revealed that Finastra will go live on Corda for its lending operations within a month. The panel, also cited Ethereum and Bitcoin as prime examples of use cases that have been active for a while.

The most pertinent points from the panel, which also comprised ConsenSys, Circle and Curl (who often curled their lips at blockchain), were that most challenges lay around interoperability; blockchain does not have a hammer lock on transparency; and the technology is not about features, it’s about governance. 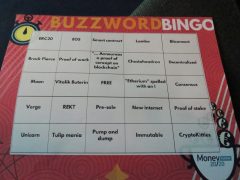 Get your bingo cards ready!

It’s nice to get a brief panel name. The discussion “How should crypto be regulated?” looked at that issue with the Bank of Japan and Abu Dhabi Global Market.

The central bank wanted to make it very clear that it has not made cryptocurrencies a legal tender. That was their opening remark. So it must have been a big issue to them.

Not a lot else came up during the discussions, but as above, the audience polls were very insightful.

In terms of best countries for initial coin offerings (ICOs), Denmark and Gibraltar came out top. There were no percentages – just a sort of word map.

But who came out worst? US, China, and “ones with extradition treaty with the US”.

As the moderator put it, there are “ a lot of cynical views” on ICOs and “only bad ICOs get media attention”.

Finally, it went lighthearted on the panel “ICO crystal ball – with buzzword bingo and beers!”

In between the jokes, some key quotes were that the “industry needs better self-regulation” and “investment banks will smell the crypto for institutional trading”.

It was a lively day for crypto chatter, and good to see so many audience polls. The industry seems to be talkative, confident, opinonated and – ICOs aside – generally upbeat.

On that note, I’ll leave the last word to Simon Taylor, co-founder of the 11:FS consultancy: “The price of crypto is down but the mood is up.”