Brazil is on course to win this year’s football World Cup in Russia if you believe in the predictions of Danske Bank.

As in 2010 and 2014, the bank has run its World Cup Model to work out the outcome. The model is still based on economic fundamentals and football-related variables and has been simulated 100,000 times.

It draws on data from the five previous World Cup tournaments and the model parameters simulate the upcoming event.

According to Danske, despite recent financial market jitters – big emerging market economies Brazil and Argentina should lead the way. Brazil has the highest probability of winning at 17%. Argentina lags behind with a 12% probability. 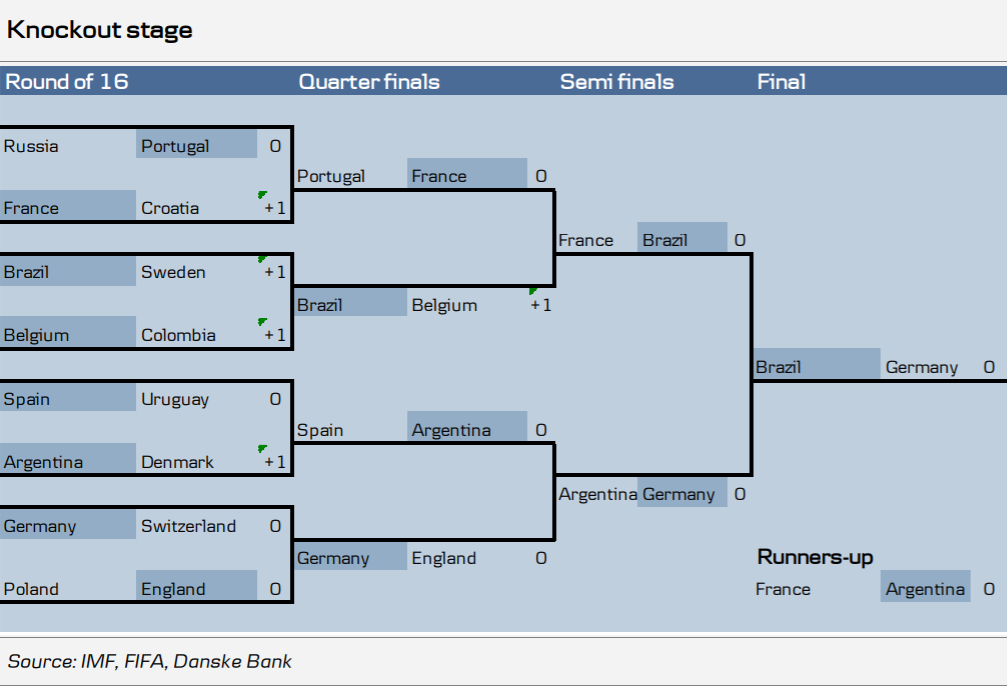 Denmark and Sweden are set to advance from the group stages before losing to Argentina and Brazil, respectively, in the round of 16. There is about a 25% chance of either team making it to the quarter final, a 10-15% chance of making it to the semi-final and a 2-3% chance of taking the FIFA World Cup trophy.

While the oil price has rallied more than 10% this year, big oil producing nations are set to disappoint at the World Cup.

While the bank predicts Russia will advance from the group stage, its model puts only a 10% probability on the host reaching the final. The remaining four OPEC+ nations are likely to leave the tournament after the group stage.

If you want more explanations to how this all works, the model includes a mix of variables.

Economic fundamentals play a “vital” role in determining the outcome of the tournament; in particular, the income level, which Danske measures by GDP per capita (in PPP terms).

For example, when Iceland, the third wealthiest nation of the World Cup, meets Nigeria, the second poorest nation, in the group stage, Iceland will have a 0.3 goal advantage.

We didn’t need a model to see that Germany beats England in the knockout stage. Danke Danske.