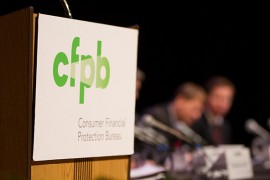 The CFPB has finalised its small-dollar lending regulation, which requires lenders (in many cases) to determine upfront whether people can afford to repay their loans.

“These strong, common-sense protections” cover loans that require consumers to repay all or most of the debt at once, including payday loans, auto title loans, deposit advance products and longer-term loans with balloon payments.

“The CFPB’s new rule puts a stop to the payday debt traps that have plagued communities across the country,” says CFPB Director Richard Cordray. “Too often, borrowers who need quick cash end up trapped in loans they can’t afford. The rule’s common sense ability-to-repay protections prevent lenders from succeeding by setting up borrowers to fail.”

Under the new rule, lenders must conduct a “full-payment test” to determine upfront that borrowers can afford to repay their loans without re-borrowing. For certain short-term loans, lenders can skip the full-payment test if they offer a “principal-payoff option” that allows borrowers to pay off the debt more gradually. The rule requires lenders to use credit reporting systems registered by the bureau to report and obtain information on certain loans covered by the proposal.

The rule allows “less risky” loan options, including certain loans typically offered by community banks and credit unions, to forgo the full-payment test. The new rule also includes a “debit attempt cutoff” for any short-term loan, balloon-payment loan, or longer-term loan with an annual percentage rate higher than 36 percent that includes authorization for the lender to access the borrower’s checking or prepaid account.

The CFPB developed the payday rule over five years of research, outreach and a review of more than one million comments on the proposed rule from payday borrowers, consumer advocates, faith leaders,  payday and auto title lenders, tribal leaders, state regulators and attorneys general, and others. The final rule does not apply ability-to-repay protections to all of the longer-term loans that would have been covered under the proposal. The CFPB says it’s conducting further study to consider how the market for longer-term loans is evolving and the best ways to address concerns about existing and potential practices.

“This federal small-dollar lending rule is a tremendous blow to the more than one million Americans who spoke out against it during last year’s comment period,” says Dennis Shaul, CEO of the Community Financial Services Association of America. “Millions of American consumers use small-dollar loans to manage budget shortfalls or unexpected expenses. The CFPB’s misguided rule will only serve to cut off their access to vital credit when they need it the most. The rule is not only misguided, it’s hideously complex for loans of a few hundred dollars. The final rule is nearly 1,700 pages—more than 300 pages longer than the proposed rule.”

He went on to say that “the flawed rulemaking process raises serious questions that demand answers.” The association questions whether the CFPB followed the Administrative Procedures Act and carefully reviewed and weighed the comments from consumers.

The rule takes effect 21 months after it is published in the Federal Register, although the CFPB says its provisions that allow for registration of information systems take effect earlier. All lenders who regularly extend credit are subject to the CFPB’s requirements for any loan they make that is covered by the rule. This includes banks, credit unions, nonbanks and their service providers. Lenders are required to comply regardless of whether they operate online or out of storefronts and regardless of the types of state licenses they may hold. These protections are in addition to existing requirements under state or tribal law.