Analyst firm Ovum hosted its Digital Futures event at which Nokia’s CTO explained why we need to fundamentally redesign the network. Banking Technology’s sister publication Telecoms.com reports from the event.

The keynote was delivered by Marcus Weldon, CTO of Nokia Networks and CEO of Bell Labs where they “invent stuff”, as Weldon put it. “We have to rebuild the infrastructure in order to digitise our world,” he announced, before vowing to explain why.

Weldon said we’re at the start of only the sixth technological revolution there has ever been, the previous one being the internet. This one he named “the automation of everything” and is more concerned with the movement of knowledge and insight as opposed to unqualified data. The internet connects people to each other and to digital media, but not the rest of the world, which is where this next revolution – generally referred to as internet of things (IoT) – comes in.

This should create new opportunities for telcos to extract themselves from the “dumb pipe” trap they seem to be constantly battling. While the transfer of unadorned data has become a commoditised, thankless task, the transfer of knowledge – in the form of data collected from countless sensors and then processed to enable informed actions – could give telcos the chance to once more add value and thus margin.

But here lies the technological challenge. For a lot of IoT cleverness, such as virtual reality (VR) or autonomous vehicles, to work we need network latency in the region of one millisecond. The technology to enable that is a core part of the 5G cunning plan, but no amount of clever tinkering from the likes of Weldon can overcome the fact that even light can only travel 100 km in 1 ms. This means that if you want to keep latency at that level your network can’t be any larger than 100 km in diameter – hence the need to radically re-architect them.

So the network needs to move from being quite centralised to massively distributed and the broader trend, says Weldon, is the shift from global to local. This could have all manner of implications over and above the need to localise the network and could possibly begin to reverse the trend of the internet being dominated by a few “web scale” players.

The discussion them moved to a panel consisting of Weldon, CEO of Iron Group (start-ups) Anne de Kerckove, CEO of Cisco UK and Ireland Scot Garner, MD of Bain Capital Melissa Bethell and CSO of Liberty Global Jim Ryan. It was chaired by Informa’s own head honcho Stephen Carter (Banking Technology is part of Informa, as are Telecoms.com and Ovum) and coincidentally the photo of the panel below provides a great illustration of latency at work. 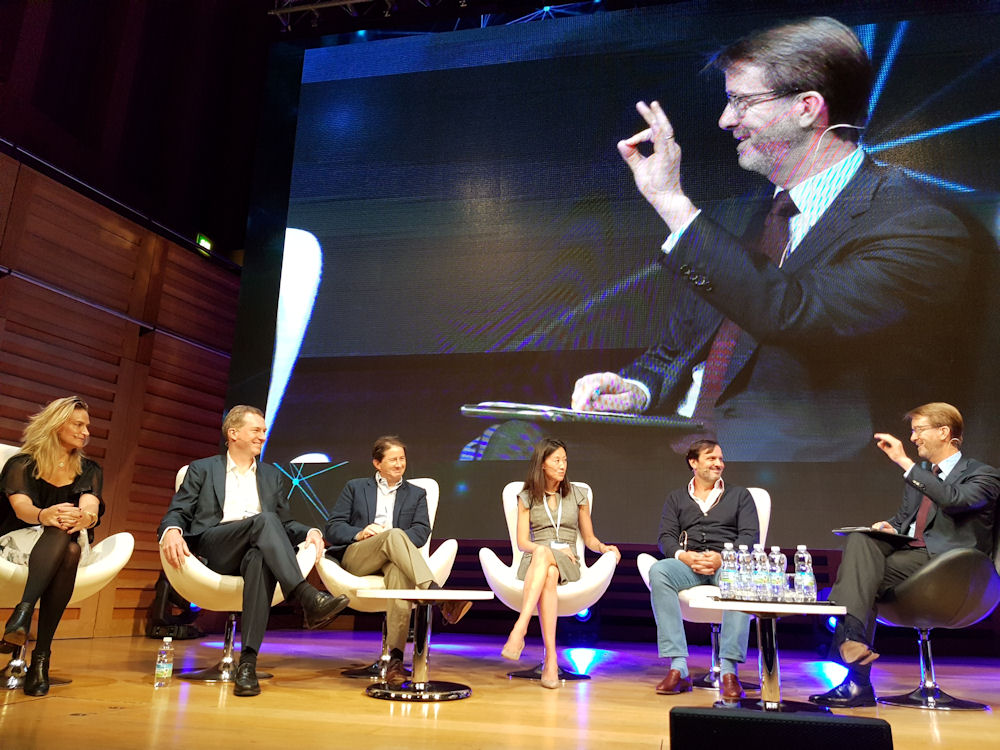 Compare Carter’s hand gesture on the video screen with his one in real-life. His fingers are clearly positioned differently, thus illustrating the slight delay experienced even in the closed network between a camera and screen only a few meters apart.

The panel explored a wide variety of topics stemming from the general digital futures theme. Bethell said equity values are significantly overblown due to the unprecedented period of loose monetary policy (low interest rates) that we’ve had since the 2008 financial SNAFU. Ryan said he thinks the real internet growth opportunities lie not in the advertising model typified by the likes of Google and Facebook, but by finding more stuff people are willing to actually pay for, ideally by subscription.

The whole panel agreed that we’re only at the very start of this latest technological revolution. When asked by Telecoms.com why things weren’t progressing more quickly since everyone seems to be holding their breath for it, some panellists blamed it on a lack of talent and ambition while others pointed out that there’s no point in moving faster than the consumer market can tolerate.