U.S. consumers aren’t buying as many prepaid cards, according to a new consumer survey from Mercator Advisory Group. The data show 56 percent of U.S. adults bought prepaid cards in the year preceding the June survey, down from 63 percent in 2016.

Consumers and Prepaid: Caution Ahead reveals that after five years of steady growth, U.S. consumers appear to be cutting back on buying prepaid cards this year, returning to 2014 buying levels.

“The recent dip in prepaid buying … is a signal that issuers should beware and increase accessibility of their cards online and by mobile, given that prepaid cards lock in spend, foster loyalty and generate significant incremental spend,” says report author Karen Augustine, manager of primary data at Mercator Advisory Group.

Although down from 45 percent in 2016, retailer-specific cards continue to be the most popular type of prepaid cards, bought by 38 percent of U.S. adults. GPR cards showed less volatility than other types of cards, but overall fewer U.S. adults bought prepaid cards in any of the eight categories tracked in the annual survey—retailer-specific cards, GPR cards, general purpose nonreloadable cards, gift cards for online services, prepaid mobile phone cards or virtual cards, long distance phone cards and transit cards.

Based on responses to an online survey of 3,011 U.S. adults conducted in June 2017 as part of the CustomerMonitor Survey Series, the report examines a demographic shift of prepaid card and virtual card buyers and the changing landscape of prepaid card use and recalled loads. 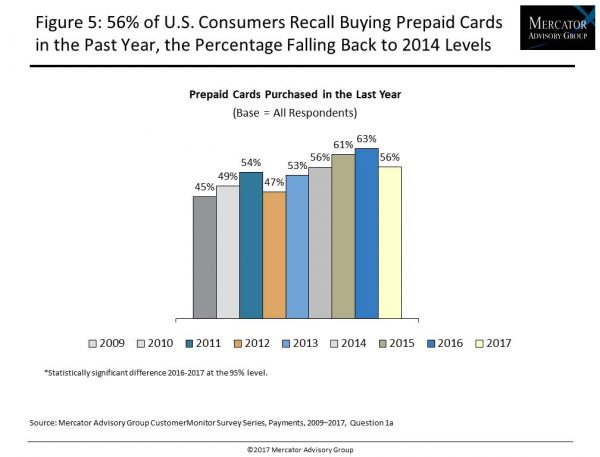 Much of the growth in prepaid had been from the young adults, particularly 25- to 34-year-olds, mobile-enabled users, high-income earners and Hispanics, according to Mercator. However, these segments are also among the most likely to have shied away from prepaid this year, Mercator says. This may be due to the flux in the retailer segment with the growth of the e-commerce and m-commerce, which has resulted in losses for many brick-and-mortar retail operations leading some major merchants to close numerous stores. Meanwhile, digital shopping and payments are growing, and often facilitated by online payment services using new, emerging payment technologies where traditional bank cards are often loaded.

Although the research focuses on consumer perceptions and behavior (not load activity), it does echo findings from the Maynard, Mass.-based consultancy’s open-loop prepaid forecast released last month. That report revealed uneven growth in the open-loop prepaid card market in 2016, with some traditionally fast-growing segments seeing declines in total loads.

In its press release about the research, the consultancy said the money/financial services segment, which includes GPR cards, had declined slightly and that the fastest-growing segment continues to be the FSA/HSA tax-deferred programs segment.

Overall Mercator forecasts that growth in open-loop prepaid loads in the U.S. will be 5 percent through 2020, reaching a total of $352.6 billion. Declines in some segments and slower growth in others have led Mercator Advisory group to revise its expectations for the overall market.

“Prepaid providers should be evaluating their businesses and looking for ways to diversify,” noted report Ben Jackson. (Jackson has since left Mercator and joined the Network Branded Prepaid Card Association as chief operating officer.) “Opportunities in the prepaid market shift with economic and regulatory changes,” he said. “New technologies such as the Internet of things, and new use cases such as corporate disbursements may provide growth markets in the years to come.”